Loosen the fixing bolt of the rocker arm · shaft and remove it. The rocker shaft is a spring between the orientation of the arm and the shaft. Be careful not to let the washers fall apart. When detaching, I think that it is better to remove it as a whole while shaking and bolts are not pulled out and installed. Since there is an order when assembling, refer to the exploded view. If there is no exploded view, I think that it is good to take it in the picture. By the way, the tightening torque of the bolt is 22 Nm. 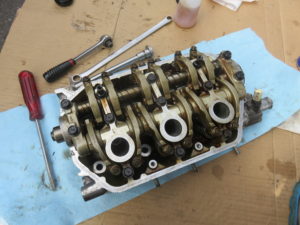 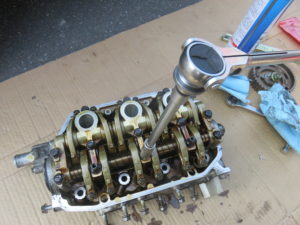 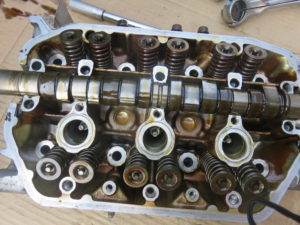 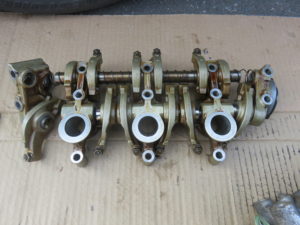 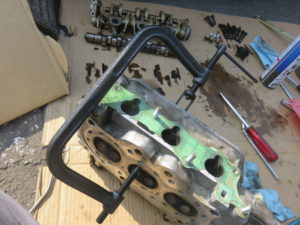 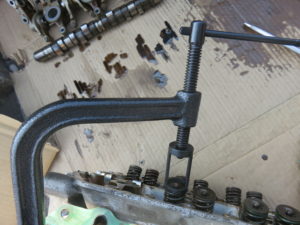 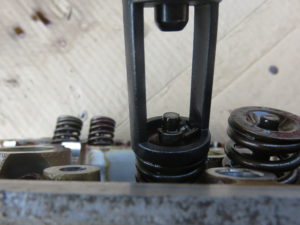 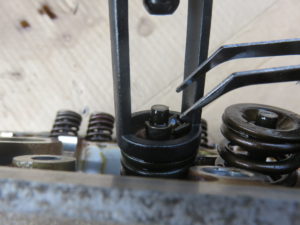 Removed valve and valve spring. Cotters are categorized as 1 to 3 of each cylinder, inlet side and exhaust side and organized. Especially valves should not be mistaken in order. This time I prepared cardboards, marked them with magic, stuck them in each case. 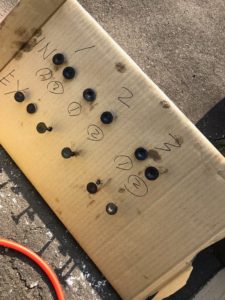 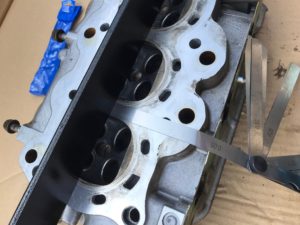 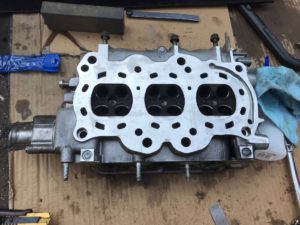 In case of overheating, since it is suspected that the “missing place” confirmed with the head gasket is distorted, pay particular attention to the parts around the combustion chamber. Perfectly accurate measurement is incompatible with this method, so when it is absolutely necessary to outsource to a vendor and measure it, we recommend that you polish the face of the head cleanly.

In this example, since it was possible to measure within 0.05 mm of the distortion reference value of the cylinder head, do not put it out for polishing, but clean the head face clean with an oil stone.

We rub the valves using a special compound and rubbing stick for rubbing. In this operation, when the valved surface of the valve seat and the combustion chamber is damaged, the contact surface is rubbed with the valve itself to polish it and clean the contact surface to maintain the confidentiality of the combustion chamber. It is a work of considerable guts to be tried because it rubs on the steady road with my own hand using the octopus stick. So, there are also methods for doing with electric drills etc., but for beginners the method is not recommended much. I wondered whether or not to introduce the method this time, but I will dare to omit it. Sorry. Let’s remember what you do by hand to the steady state. 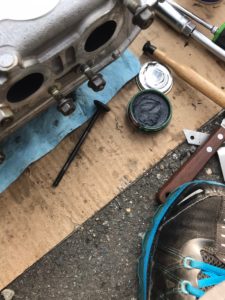 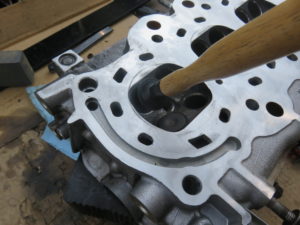 After putting an appropriate amount of compound around the valve seat, put the valve on the sucker of the octopus rod in the new world, bring your hands to the part of the bar, turn the octopus rod to visit the shrine. Even if the suction cup becomes easy to take off at this time, please reinstall it and try hard. Although it may be irritated, since the total number of valves in a 660cc three cylinder engine is 12, it should be better than an ordinary engine. Once you start you can not quit on the way, let’s polish all 12 valves until they are beautiful. This may no longer be an exercise. That is too much trouble. I’m about to cry. However, after accomplishing this work, enlightenment will be opened and the bright light of “a sense of accomplishment” will shine above your head. 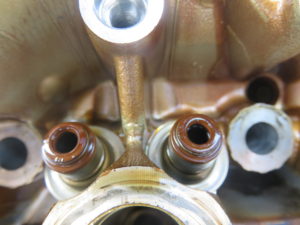 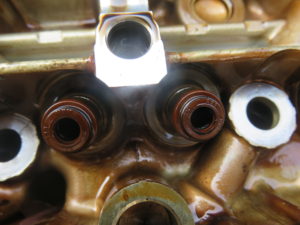 The replacement method is simple, remove the old stem seal with pliers, etc. When installing it, just bite a 10 mm 12 sided socket and push it with your hands. I think that it would be better to quit because hammers and others think that it will cause damage to the seal. This is the same as the number of valves and there are 12 places. On the inlet side and the exhaust side, the color of the small spring attached to the valve stem seal is different and the inlet side is silver. The exhaust side is black. I will not mistake it. 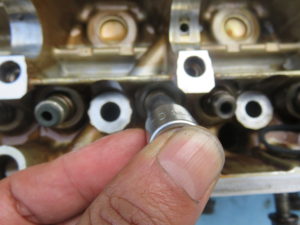 If you can do the work so far, I will install it as it is. The procedure is as follows.

When installing a cotter, it is mounted with tweezers etc. with the spring spring compressor shrunk, but if you try to attach it to the notch part of the valve, the cotter is very small, because the position slips off slipping off, Using grease etc. can be set accurately. 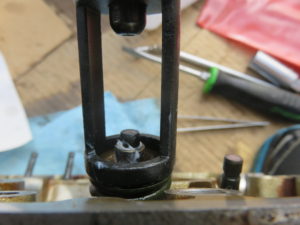 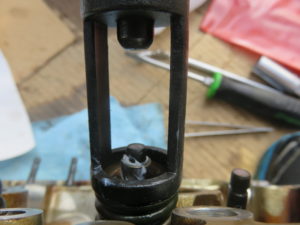 After assembling everything, be sure to check whether there is no mistake. 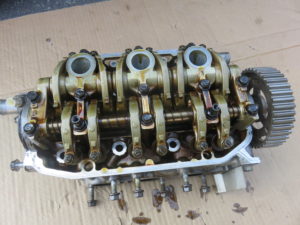 Also assemble the rocker arm / shaft is a little troublesome, so post an exploded diagram. 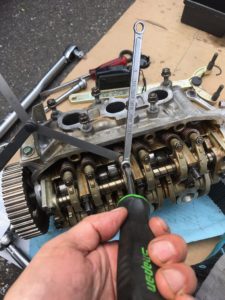 Place the cylinder head sideways and make sure the position on the valve can be confirmed and set the first cylinder to the compression top dead center in the same way as adjusting the matching mark of the timing belt at the position of the camshaft · sprocket. In that state, insert a thickness gauge into the gap between the valve spring and the rocker arm, loosen the 10 mm lock nut, and turn the adjustment screw at the center with a flat head screwdriver to adjust it. 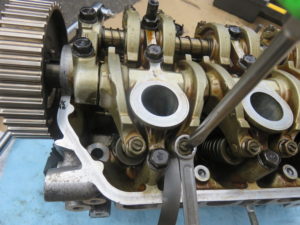 Loosen the adjustment screw until the adjustment screw is tightened with a flathead screwdriver until the thickness gauge does not come off and the gauge comes out in a state where there is little resistance from that state. When that is done, tighten the 10 mm lock nut and fix it. Do this at all valve locations.

Before installing the cylinder head, there is a part called a small engine oil orifice on the cylinder block side, but do not forget to install this. This part, which the manufacturer designates to replace at the time of engine OH, is a passage for engine oil, but if it is clogged, it seems to cause overheating. So do not forget to order it when ordering parts. 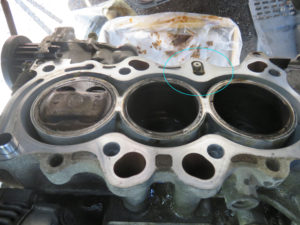 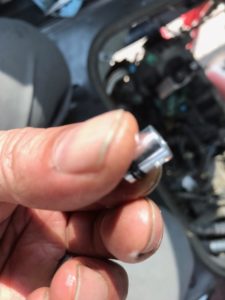 Installation is not difficult, just remove it with pliers and push it with your fingers. It looks trivial, but let’s do it without getting tired.

I will examine the cylinder head gasket that I removed. This engine has a water jacket so as to surround the cylinder liner on the block side, but there was a trace of missing towards the water jacket in both the cylinder / block per side and the cylinder / head abutment side. It is thought that the gas in the combustion chamber leaks into the water jacket from there and circulates in the water line, it becomes air chewing, the cooling water temperature rises and overheated, but because the head gasket is weak in the first place, Or because the car’s waterline is structured to allow air to be chewed for some reason, because there is a distance between the radiator and the engine body, the waterline is too long, so the radiator cap is not functioning, etc. It seems that opinions are being stated on the net. 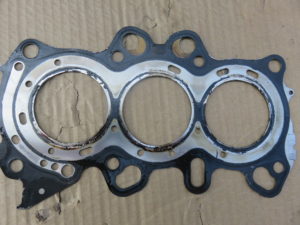 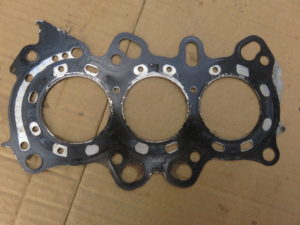 By the way, the new head does not change as much as the shape, but it seemed to be redesigned with increasing strength, or slightly thicker. As for me, as with many cars, cars with a long distance between the radiator and the engine body in the rear engine are very difficult to bleed the cooling water, and even if they do proper maintenance, the air is slightly I am afraid that I am running continuously while I remain. If the position of the radiator can not be changed due to the structure of the car, I will think about adding another radiator cap and subtank to the position near the waterline engine, but I do not take reality any way Right. I think it would be nice if we could take a bit more opinions from the structure of this car and make a better way to improve overheating, but it seems difficult. 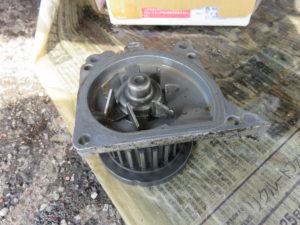 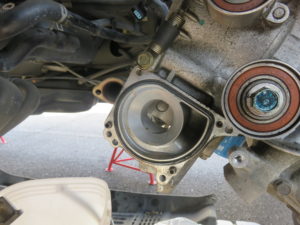 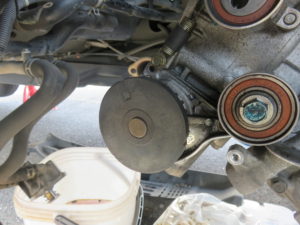 Also in the cylinder head, please rotate the camshaft so that the first cylinder becomes the compression top dead center (align the matching mark of the camshaft sprocket).

Although it is basic, this engine rotates counterclockwise, the timing of one revolution of the camshaft per crankshaft two rotations. So, for example, even if the matching mark on the crankshaft is aligned, if the first cylinder does not become the compression top dead center, it should be done another rotation. Then, in order to confirm the condition that the first cylinder is the compression top dead center in the cylinder head, with the matching mark of the camshaft sprocket aligned, the state of the valve of the first cylinder combustion chamber is changed to the state of the inlet and the exhaust It is said that both are closed and that the camshaft is not acting. 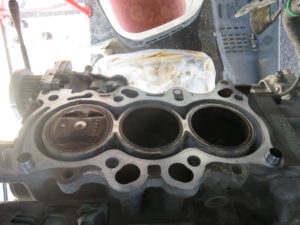 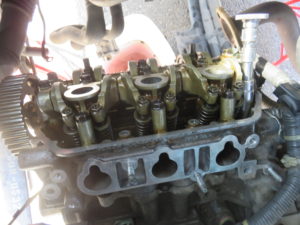 After confirming the above, set the head gasket to the correct position and carefully place the head. Once mounted, temporarily tighten the cylinder head bolts equally. At that time, make sure that the cylinder block side and the head gasket, cylinder head are surely docked, and then complete tightening. This is also basic in the basic, but in the reverse order when loosening from the center of the head, firstly tighten equally with a wrench to some extent, then apply torque properly with a torque wrench. This work also needs to be done with considerable nerve.

Cylinder head bolt loosening order is cited from maintenance manual. When tightening, it should be in reverse order of this order, drawing a diagonal line from inside to outside of the cylinder head.

When installing the cylinder head, install the exhaust system, etc., in order of the intake system and electrical system. After that I install the timing belt, but I attach the tappet cover last.