By the end of the 1950s, inexpensive, compact and high-performance rectifiers were developed, and instead of DC generators, AC generators equipped with this rectifier were used to convert AC to DC. It was This is called an “alternator”.

By adopting an alternator, the power generation capacity (charging capacity) at a low speed can be significantly improved, and the maintenance of commutator and brush, which has been a long-standing problem, has been released. ..

The conversion to this alternator also took place at a very fast speed, and even Japanese cars were almost finished in the latter half of the 1960s. 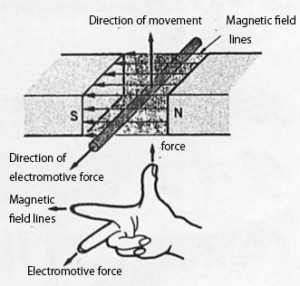 In case of DC generator (dynamo)

The structure of this commutator and brush was incomplete and caused various troubles depending on the maintenance. In low-speed rotation that does not reach the charging voltage, a cutout relay is required to prevent backflow from the battery, and the charging capacity at low-speed rotation is low, and the armature (armature) coil is not good at high-speed rotation. For this reason, when a compact and highly reliable silicon diode rectifier was developed, it was replaced by an alternator.

The principle of power generation is the same as that of a DC generator, but the way of extracting the generated electromotive force is different. Figure 3 below shows the principle of an alternator, but with both ends of the coil connected to a slip ring instead of a commutator. In that case, since the connection state between the slip ring and the brush does not change, the coil rotates and the direction of the electromotive force generated in the coil also changes. This is the principle of AC power generation. 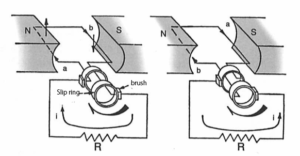 However, in an actual alternator (alternating current generator), the coil that generates electric power is wound around the stator side and does not rotate, but the magnet side rotates. Therefore, this is sometimes called a field rotation type or a field rotation type.

The rotating magnet (rotor) is excited by an exciting battery and a rotor coil. (Excitation: Generates magnetic flux) Therefore, the current flowing through the slip ring is not the output current but a small current for excitation, so that the life of the slip ring and brush can be further extended.

This is one of the characteristics of the alternator.

A brushless vehicle may be used in a large vehicle that requires a longer life.

Even with the same AC generator, many bikes use permanent magnets for the rotating magnets, simplifying the structure. Further, the rotary magnet is an outer rotation type that rotates around the power generation coil and is a part of the flywheel mass.

The features of the alternator are summarized below. 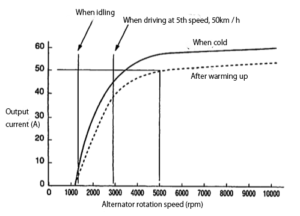 From Fig. 5, taking an example of the power generation output characteristics, although the output at low speed rotation was improved, only about 10 to 20% of the rated output is output at idle. Therefore, when the engine speed is low, such as during idling, the amount of power that can be generated is less than the required amount of power, so the battery will make up for the shortage. And as the number of revolutions increases, there is more output, so the extra power is used to charge the battery. 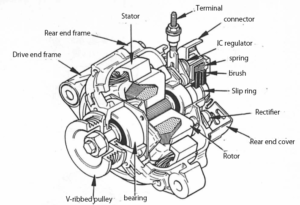 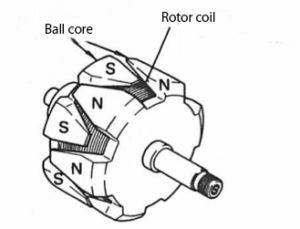 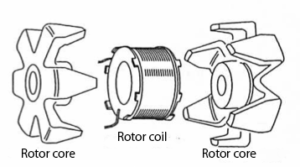 The rotor is as shown in Fig. 9, but the structure is as shown in Fig. 10. The rotor coil (field coil) is sandwiched between two rotor cores. Therefore, when an exciting current flows from the split ring to the rotor coil, the two rotor cores are excited to the N pole and the S pole, and the N pole and the S pole are alternately arranged on the surface facing the stator core. The rotors in Fig. 4 and Fig. 7 can be thought of as a set of north and south poles taken from the actual rotor. 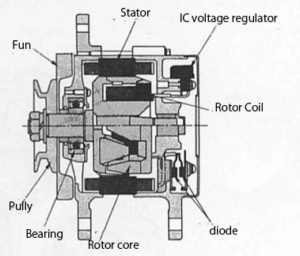 In this way, the rotor can be multi-polarized with a simple structure, and can have the strength to withstand high-speed rotation and high efficiency. 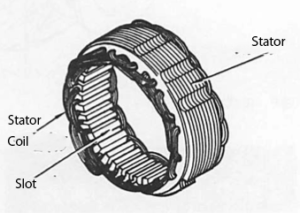 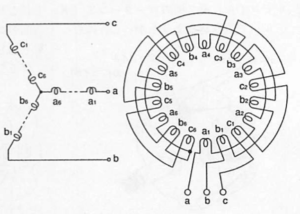 Since the alternator generates electricity, a current flows through the coil, which is a kind of resistor, and thus heat is naturally generated. Therefore, a cooling fan is installed to prevent coil insulation and damage to the diode.

The alternator is usually driven by a fan belt from the crankshaft, but the rotation speed is about twice that of the crankshaft. 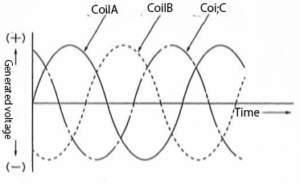 When the rotor rotates, out-of-phase electromotive force is generated in the three coils of the stator. (See Fig. 14) This is called three-phase alternating current.

However, in this state of electromotive force, it cannot be used for electric parts of automobiles such as battery charging, so it must be rectified to direct current. The connection state with the diode used as the rectifier is as shown in FIG. 15. By rectifying the three-phase AC shown in FIG. 14, a DC as shown in FIG. 16 can be obtained. 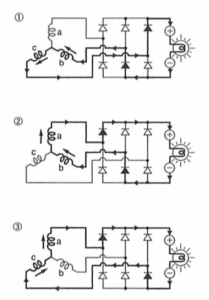 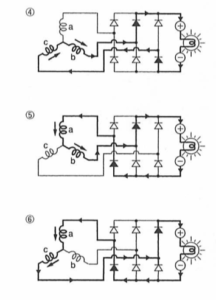 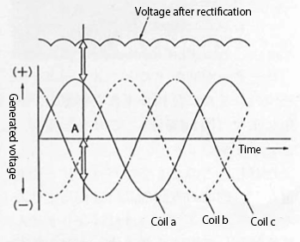 In full-wave rectification, the magnitude and direction of the current flowing through the three coils change in sequence, but the current always flows in a fixed direction on the load side.

Since the diode allows the current to flow only in one direction, it is possible to prevent the reverse flow of electricity from the battery when the generated voltage of the alternator is low. In other words, the cutout relay for backflow prevention, which was necessary in the case of a dynamo (DC generator), is no longer necessary. 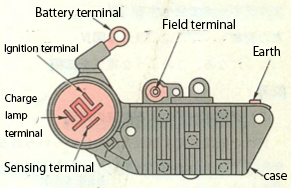 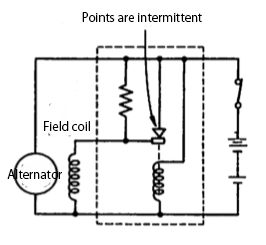 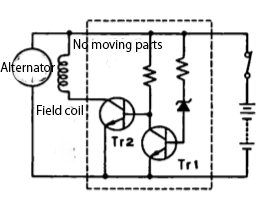 The circuit diagram of the actual charging system is shown in Fig. 19.

It seems that current chargers such as alternators are almost complete, but with the recent development of sensors and electronic controls, fine-tuned control aimed at further improving charging efficiency and improving fuel efficiency of automobiles has been carried out. It is being appreciated.

For example, charging control is performed according to the running state. When acceleration or climbing that requires engine output, the generated voltage is lowered so that it does not charge much, and when the accelerator (throttle valve) is closed and decelerated, the generated voltage is raised to ensure proper charging. The idea is to recover the kinetic energy of the car when decelerating and use it to charge the battery. If anything, there seems to be something close to hybrid car technology.