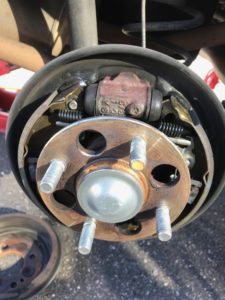 Drum brakes are used not only for trucks but also for rear brakes of mini cars and small cars. It is said that drum brakes were first developed by Rolls-Royce in 1904, so the car was born shortly after, and has twice the history of disc brakes. Around 1920, it was discovered that there was a self-servo (self-boosting) effect, so it became clear that a strong braking force could be obtained with a small pedaling force by using a two-leading system (two brake shoes). Since then, drum brakes have made great strides. 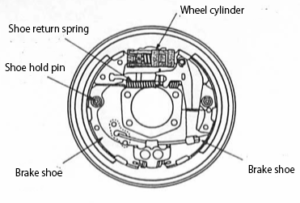 Since the drum brake can be operated as a parking brake, a parking brake mechanism is incorporated into the rear brake drum, the center brake directly connected to the propeller shaft of the truck, and the drum inside the rotor of the disc brake.

However, there is a weak point in the cooling performance, and there is a problem in exhibiting a stable braking force at a high speed. As a result, the front brakes on passenger cars have now been almost entirely replaced by disc brakes. 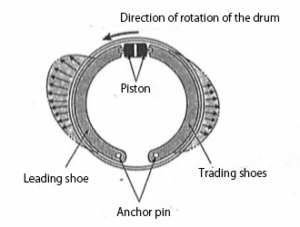 The typical structure is as shown in Fig. 1, but it is divided into several types depending on the combination of the anchor pin and the wheel cylinder. Fig. 2 shows the surface pressure distribution of the brake shoe in the leading trailing shoe type, which is the basis of the drum brake. The leading shoe is strongly pressed against the drum by the self-servo action (self-boosting action). , Can exert a greater braking force than the trading shoe. At this time, the job of the leading shoe is about three times that of the trading shoe. Therefore, a two-leading shoe type was developed based on the idea at the design stage, “Which shoe can perform the same as the braking action of the leading shoe?” 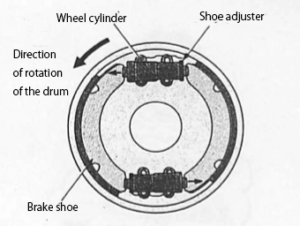 The two-shoe type (Fig. 3) has excellent braking power when moving forward, but when retracting, both shoes become trading shoes, so the braking power is greatly reduced. I will. 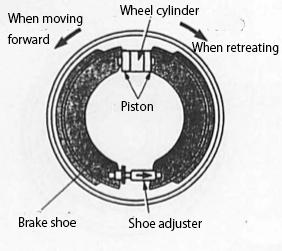 This does not make much sense. The duo-servo type shown in Fig. 4 replaces the lower ends of the two shoes with anchor pins and replaces them with movable shoe adjusters. By adopting such a mechanism, since the trading shoe is pushed and opened by the shoe adjuster regardless of whether the vehicle is moving forward or backward, both brake shoes can function as the trading shoe.

However, at present, most of the drum brakes used in mini vehicles and small vehicles are of the leading-dragging type, which is the first system invented as shown in FIG. The reason is that most of these drum brakes are mainly used as rear brakes. In front engine / front drive (FF) vehicles, the load on the rear axle is basically smaller than that of the front, so it is larger. There is no braking force required, and the purpose is to prevent the rear wheels from locking too early to prevent driving control due to the rear braking force being too high before the front when the car is running. It is. 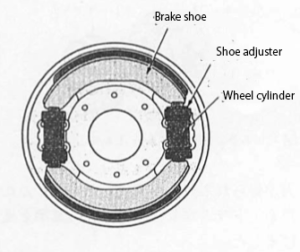 In large vehicles such as trucks, the load on the rear wheel is large both forward and backward, so a dual reading shoe type drum brake that uses wheel cylinders with pistons on both sides attached to both ends of two shoes is adopted. . 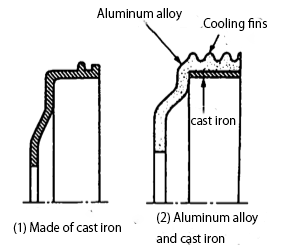 Brake drums are generally made of cast iron, but aluminum fin drums, which combine an aluminum alloy body with a cast iron lining, may be used to reduce weight and improve cooling. (Fig. 6)

The wheel cylinder receives the brake hydraulic pressure from the master cylinder and presses the drum against the shoe. There are two piston cylinders and single piston cylinders depending on the number of pistons. (Fig. 7, Fig. 8) 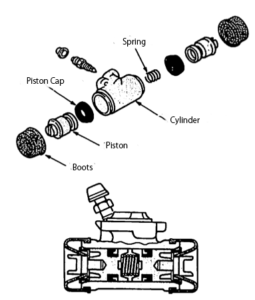 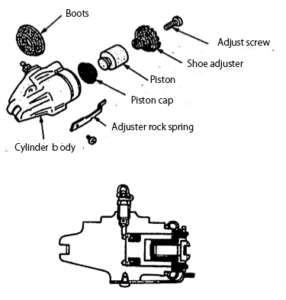 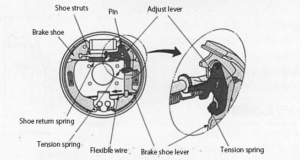 In FIG. 9, when the parking brake lever is pulled, the brake shoe lever is pulled in the direction of the arrow, so that the adjust lever moves upward with the pin as a fulcrum as shown by the arrow in FIG. Get over. 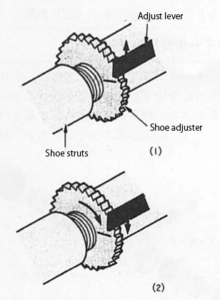 When the brake lever is returned, the adjusting lever is lowered by the spring force of the tension spring as shown in FIG. 10 (2), and the shoe adjuster is rotated, so that the shoe strut is spread outward. Therefore, the gap is adjusted within the specified value.

When disassembling and repairing the drum brake during vehicle inspection and inspection, the shoe adjuster is rotated in both directions to adjust the gap between the shoe and the drum, so that the foot brake can be depressed and the parking brake pulled. The margin is adjusted to determine the braking performance.

The adjustment method of the drum type brake varies depending on the mechanic, but basically, the gap between the shoe and the drum is slightly reduced from the state where the drum body is barely rotated or not (if the adjuster is 3 to 3). (About 5 frames), when the drum is rotated and the drum is rotated, it is appropriate that some resistance is felt due to contact with the shoe. However, the condition of the car (how much load is applied to the front and rear wheels, etc.) and the demands of the user (Strength of pulling of parking lever, etc.) and line inspection standards at the time of vehicle inspection will vary slightly. Whether it is a passenger car or a large vehicle such as a truck, this brake adjustment is one of the important maintenance items that must be extremely nervous even during disassembly and maintenance. I would recommend that you work with enough basic knowledge to avoid accidents.