The role and type of suspension

When the car on which people ride was the first in the world to appear in the form of a carriage, springs were already used in the carriage as a suspension.

Since the first Mercedes-Benz four-wheeled vehicle had a gasoline engine attached to the carriage, it means that the car was equipped with a suspension from the beginning.

At that time, the suspension was only an elliptical leaf spring type suspension, in which the leaf springs used in today’s automobiles were stacked vertically symmetrically. In other words, since this leaf spring is the only one that stabilizes the movement of the axle, it sways with respect to the vehicle body, and the positioning of the wheels was not accurate, so it was extremely unstable.

Also, in the early days, automobiles had low speeds, rubber tires were not even invented, and iron wheels were used instead of wheels, so the grip was much lower, and the force that the wheels transmitted to the vehicle body was also low, so it was used for suspension. It seems that the required performance did not have to be very advanced.

As the engine output increased with the evolution of automobiles and people using cars began to use cars at high speeds, pneumatic tires were invented as new wheels. Pneumatic tires have dramatically improved ride quality and significantly improved grip on the road surface.

Therefore, it has become necessary to lower the center of gravity of the vehicle and ensure wheel positioning (wheel alignment).

The role of wheel alignment and suspension

The first role of the suspension is to absorb the impact from the road surface, but at that time the wheels move up and down and the direction and inclination of the wheels change, so the second role is to properly ground the wheels to the road surface. be. That is, generally speaking, it is said that it is desirable for the vehicle body that the tires are as perpendicular to the road surface as possible.

In terms of keeping these tires perpendicular to the road surface, the rigid axle type (axle suspension type) has an excellent aspect among the suspension types, but it is disadvantageous in terms of ride quality and steering stability. Due to its disadvantages, it is now rarely used in passenger cars. (On the other hand, it is used in most cars for heavy-duty trucks that need to withstand high loads.)

In addition, as tires have become more sophisticated and thicker as they are today, even slight changes in camber and tread have come to affect the behavior of the vehicle, so double wishbone and multi-link types have come to be affected. Suspension was developed to enable higher level wheel movement.

It is also important that supporting the weight of the car body is one of the most basic roles as a major premise of the role of the suspension.

The basic role of the suspension is shown below.

In addition, many trucks use rigid axles for both front and rear wheels, and by the time the FR system was the mainstream for passenger cars, many models adopted rigid axles for the rear wheels and independent suspension for the front wheels. Was.

Rigid axles are sturdy axles that firmly connect the two wheels, so the tires are close to perpendicular to the road surface, that is, they are ideal for achieving full tire performance. There are merits. 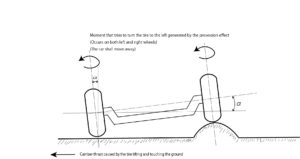 Figure 1: Force generated when one wheel rides on

However, when one wheel rides on the road surface, the other wheel is also affected, the installation condition changes, and both wheels tilt. (refer graph1) 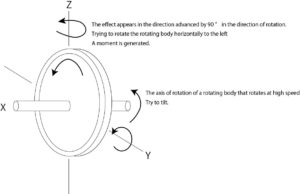 As shown in Fig. 1, when one wheel rides on a protrusion or the like, in the case of the front wheel, the steering wheel is taken to the tilted side opposite to the protrusion due to the presession effect. The ground contact state changes when the other wheel also tilts, and the canvas last (lateral force acting in the direction in which the tire tilts) tries to move in the tilted direction. In other words, if the car tries to move in an unexpected direction, the straightness will be hindered.

The gyro effect increases proportionally as the rotation speed of the wheels increases and the outer diameter of the tire increases (as the vehicle speed increases). Therefore, although there is no phenomenon that the steering wheel is taken off on the rear wheel side, it may be shaken to the left or right to some extent.

In addition, when encountering unevenness at high speed, the rigid rack itself is heavy, which causes a phenomenon in which the left and right wheels vibrate up and down alternately (a phenomenon like stepping on the ground), and the ground contact of the wheels deteriorates. Stability at high speeds may deteriorate.

In addition, when a soft unsprung load is combined with a soft spring (with a small spring constant), the wheel tends to run wild, and the use of the soft spring is restricted.

Ride quality depends on acceleration rather than the amplitude of vibration on the spring (vehicle body), but when acceleration is multiplied by mass, it becomes a force.

Other than that, in the combination of leaf springs and rigid axles used in trucks and old passenger cars, it is necessary to steer the steering to the left and right in the case of front wheels, so the spring mounting position must be moved inward. (See Figure 3) 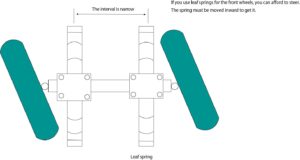 However, in the case of a rigid axle, a force that opposes the roll is generated at the mounting position of the spring. In that case, the roll rigidity, which indicates the difficulty of rolling, is proportional to the square of the distance between the two springs on both sides. It ends up.

In an FF passenger car, if an independent suspension is used for the front wheels, space can be secured because there are no obstructive axles, and the engine mounting position can be moved to the front of the center of the front wheels for mounting. .. As a result, the indoor space can be made much larger.

However, when trying to adopt an independent suspension for the rear wheel of an FR car, a drive shaft with a joint is required in addition to a complicated suspension arm, which makes development difficult and cost performance worse. ..

In summary, the independent suspension is widely used on the front wheel side, which has a great effect on improving steering stability, and is also adopted on the rear wheel side as the average running speed improves and the performance of the entire vehicle improves. It became so. It can be said that the purpose is not only to improve the ride quality but also to improve the steering stability.

Grease Monkey
Wheel alignment
https://katuhito.info/en/wheel_araiment
Wheel alignmentThe wheels of the car are provided with angles to allow the car to perform appropriate movements for each of these purposes in order to maintain driving performance such as straightness, turning, and restoring force to the straight state. This alignment between the wheels is called wheel alignment.Typical elements of wheel alignment include the positional relationship between the front and rear wheels of an automobile, camber, casters, kingpin tilt angle (SAI), toe-in, and the ...