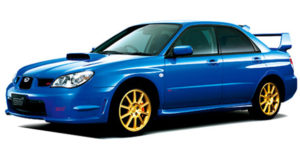 In order to improve driving performance by transmitting and controlling the torque of the STi specification DOHC high power turbo engine (maximum output 206kW-maximum torque 373Nm), a full-time 4WD 6-speed manual transmission has been adopted to improve the operation system. There is. As an operation system, in order to cope with the high power of the engine, the starting performance is improved by increasing the clutch capacity and improving the clutch oil pressure gauge. 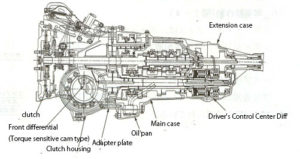 Figure 1: Inside the transmission

The clutch capacity of the clutch disc has been increased from the conventional outer diameter x inner diameter: 230 mm x 150 mm to 240 mm x 160 mm. The clutch operation system is a hydraulic pull type, and an orifice is provided in the hydraulic circuit to prevent sudden clutch engagement. 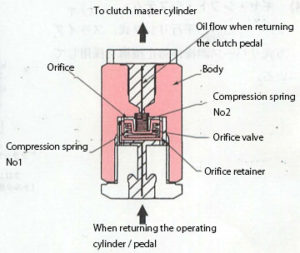 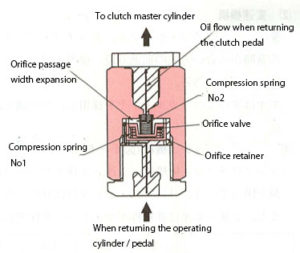 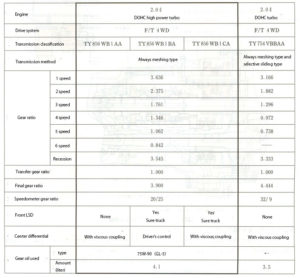 The transmission mechanism has two main transmission gears with a main shaft and a drive pinion shaft arranged in parallel, with 6 forward and 1 reverse gears that are always engaged, and the reverse reverses the direction of rotation via the reverse idle gear. It is a method to make.

Helical gears are used for all gears, and the gear specifications and tooth width have been reviewed and the distance between the centers of the main transmission gears has been expanded to 85 mm to improve gear strength.

The synchromesh mechanism adopts multi-cone synchro for 1st to 3rd speed and reverse to reduce the shift operation force. The reverse synchro is located in the reverse idle gear section.

In addition, asymmetric gear dogs are used for 2nd to 6th gears to improve operability. 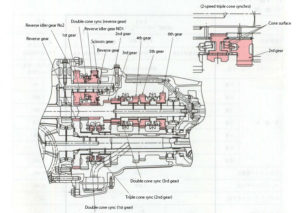 Figure 7: Inside the synchromesh mechanism

As the reverse gear is constantly engaged, a scissors gear is installed in the reverse idler gear No. 1 to improve quietness.

By sandwiching the drive side gear between the scissors gear and the idler gear that have received the spring force, the backlash of the gear is set to 0 and rattling due to the meshing of the gear is prevented. 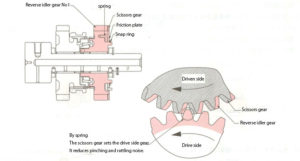 The shift pattern is a floor shift system with 6 forward steps and 1 backward step, and friction is achieved by adopting slide ball bearings for each rod support and mounting a ball built-in plunger on the shift detent mechanism. Has been reduced and operability has been improved. 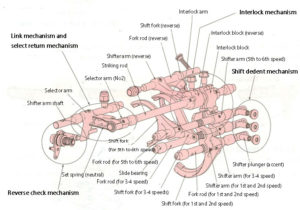 The shift dedent mechanism uses a check ball to prevent the gear from coming off. A small ball is embedded in the back of the check ball part.

Slide ball bearings are used for each rod support.

The select / return mechanism consists of a shifter arm shaft, selector arms (No. 1 and 2), a striking rod and a set spring (neutral). 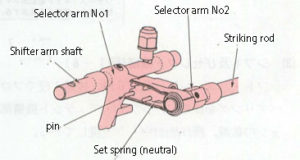 The interlock mechanism is a block type, and the reverse is arranged independently on the layout. 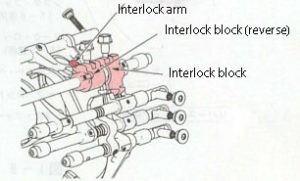 Except for the selected arm, the interlock block engages and is locked.

Figure 15: During an intermediate shift 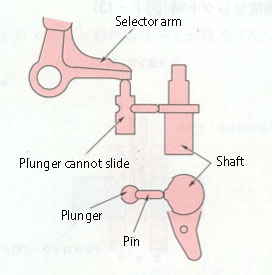 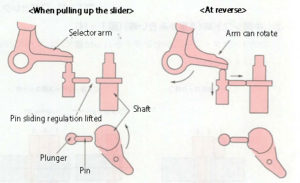 The basic structure is a planetary gear system for the center differential, the operation limiting device is an electromagnetic crimp variable control multi-plate clutch, and the front-rear drive distribution is 45:55. In addition, the overall length has been shortened to support 6-speed gears, and the outer diameter of planetary gears and multi-plate clutches has been reduced. 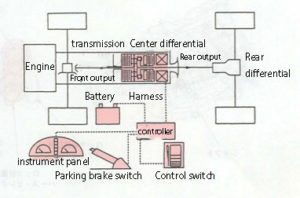 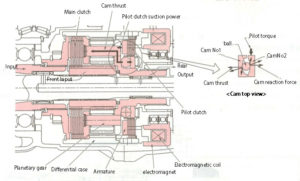 The structure is the same as the torque-sensitive cam type LSD used for the rear differential, and it has the feature that the torque bias ratio can be selected widely.
Since no relative rotation occurs between the left and right face cams while traveling straight, the input torque from the drive gear is transmitted to the face cam from the side surface of the cam follower.
When relative rotation occurs in the face / upper notch due to turning or slipping, the cam follower reciprocates left and right while transmitting torque to the face cam.

An oil pump is installed at the rear of the main case and pumped to the lubrication passages such as the main shaft, drive pinion shaft, and transfer to forcibly lubricate each part, and an oil chamber is provided to reduce stirring resistance. We are trying to improve efficiency.
The oil pump is a thin trochoid type, driven via a gear integrated with the center differential case, and has a regulator valve and a relief valve on the discharge side.