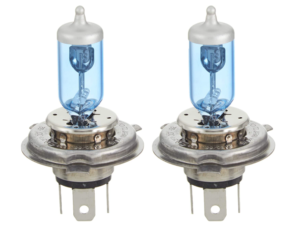 For each purpose, there are luminosities and colors regulated by law.

In addition, since stop lamps, tail lamps, turn signal lamps, etc. are installed at the rear of the car, a combination lamp that combines each lamp into one is used from the viewpoint of simplification of the lamp assembly and design. There is.

As shown in Fig. 1, a bulb is generally provided with a filament as a light source inside a glass sphere, which is filled with a mixture of nitrogen gas and an inert gas such as argon gas, and a bulb with a mouthpiece is used. ..

In addition, halogen lamps that use an enclosed gas in which xenon gas or krypton gas is added to iodine are used for headlamps (Fig. 2).

Compared to ordinary gas-filled bulbs, this bulb is brighter with the same capacity, has a longer life, and has stable luminosity. In addition, filamentless discharge tube type headlamps filled with xenon gas, which consumes less power than halogen lamps and doubling the amount of light, are also used in some cases.

In either case, the light emitted from the filament is reflected directly or by a reflector, passes through the lens, and is projected forward.

Reflectors are generally made of metal or glass material and are shaped like a rotating paraboloid. If the parallel light rays reflected by the reflector are irradiated as they are, it will give glare to the oncoming vehicle when they pass each other. , The optical axis is adjusted so as not to give glare to oncoming vehicles.

In addition, as shown in Fig. 3, various lens shapes are adopted depending on the vehicle model.

As shown in Fig. 4, the entire unit of the sealed beam type headlamp is a light bulb, and the reflector has an aluminum plating on the glass surface.

A light-shielding cap is installed above the filament to block the light directly shining upward from the filament, prevent diffused reflection by water droplets and snowflakes in bad weather such as rain, snow and fog, and prevent the front visibility from getting worse. Has been done.

As shown in Fig. 5, the semi-sealed beam type headlamp has a lens and a reflector integrated.

The valves are designed to be installed independently and can be replaced from the rear. Halogen lamps are used for the bulbs.

The purpose of headlamps is to illuminate the front at night, and the light distribution characteristics are important in terms of functionality because they must not give glare to oncoming vehicles when they pass each other. In other words, how the light is diffused and irradiated.

The headlamp has a flat light distribution characteristic that is wide horizontally and narrow in the vertical direction due to its use, and its brightness is weak at both ends and becomes stronger toward the center. In addition, these light distribution characteristics can be changed according to the conditions when traveling and when passing each other.

As shown in Fig. 6, the two-lamp sealed beam type headlamp has two filaments in one unit.

The other filament (for the passing beam) is located slightly above the focal point.

When the filament for the passing beam is switched with the changeover switch, the position of the light source is raised, so that the light flux illuminates in the downward direction and slightly to the left (opposite direction of the oncoming vehicle) due to the nature of reflection.

In the two-lamp semi-sealed beam type headlamp (halogen lamp), as shown in Fig. 8, the passing filament is arranged in front of the focal point, and a light-shielding plate is provided under the filament.

FIG. 10 is an example of a lighting circuit. To operate this circuit, when the light control switch is set to “T”, the tail lamp relay is turned on, and the tail lamp, clearance lamp, and license lamp are lit.

Next, when the switch is set to “H”, the headlamp relay turns on and the headlamp lights up at the same time.

In addition, the direction and distance illuminated by the headlamps are switched by the dima switch when traveling and when passing each other.

The tail lamp is often used as a stop lamp because the lighting color is the same, and a double filament type bulb having a filament corresponding to each brightness is often used.

As an electric circuit, as shown in Fig. 10, it can be turned on and off by operating the light control switch through the tail lamp relay.

The red lens is determined by the “Safety Standards for Road Transport Vehicles”.

The stop lamp is often used as a tail lamp because of the color of the light. Therefore, its type and structure are the same as the tail lamp except for the high mount stop lamp.

When the brake pedal is depressed for braking, the brake pedal advances, so that the rod in the switch is pushed out by the spring, the contact comes into contact with the metal portion from the insulating portion, and the lamp lights up.

Some back lamps are used as combination lamps by incorporating them together with other lights, and some are attached to the rear bumper or frame by a bracket that is independent of the other lights. ..

Further, in an automatic transmission, when the shift lever is operated in the reverse range, the backward light circuit is turned on by the inhibitor switch (range positioning switch) and the lamp is turned on.

Turn signal lamps and flasher lamps (turn signals) notify other vehicles and pedestrians of the direction by blinking the lamps when changing the direction of travel of the vehicle, so their operation is surely performed and confirmation It must be easy.

Therefore, the following properties are required.

The turn signal flasher unit that performs this blinking operation is divided into IC type, transistor type, capacitor relay type, etc. from the viewpoint of the operating principle, but since IC type is often used, the IC type will be described.

As shown in Fig. 15, the IC type is a combination of an IC that controls the blinking of the turn signal lamp and a relay. The inside of the IC is roughly divided into an oscillation circuit, a relay drive circuit, and a lamp disconnection detection circuit.

If one of the signal lamp bulbs is disconnected, the current passing through the current detection resistor in the unit will decrease. The change in current at this time is replaced with the change in voltage due to the resistor, and the lamp is detected by the disconnection detection circuit. By sending this detection signal to the oscillation circuit, the number of blinks is increased, and the driver is notified of the disconnection of the lamp.

The hazard lamp blinks the front, rear, left, and right signal lamps at the same time in the event of a road failure to indicate that the vehicle is stopped or to warn, and also serves as a turn signal lamp.

Therefore, as shown in FIG. 16, a hazard warning switch is provided in the circuit of the turn signal flasher, and the flasher unit is also used.

The difference from the turn signal flasher is that even if the bulb is broken, the number of blinks does not change in order to maintain the display function in the event of a road failure.

As shown in FIG. 17, the speed display device is composed of three indicator lights that light up according to the vehicle speed, a vehicle speed detection device (operation recorder), an inspection switch, and the like.

Speed ​​indicators were used mainly for heavy-duty trucks used for commercial freight, but are now obsolete.

The speed of the vehicle is indicated by three indicator lights provided on the upper part of the driver’s seat of the car body. Was lit, and it was stipulated by law that all three would be lit at speeds of 60 km / h or higher.

The lighting color of the speed display device is green. Nowadays, instead of this indicator light, heavy trucks used for commercial cargo are required by law to be equipped with a speed limiter that limits the vehicle speed to 90 km / h.

When an excessive current flows through an electric circuit, the fuse itself blows due to the influence of the thermal action of the current to cut the circuit, and the fuse is used for the purpose of protecting the electric wiring and the device.

For automobiles, the blade type as shown in FIG. 18 is mainly used.

Zinc alloy or the like is used for the fusible piece of the fuse, and the terminals are plated with copper and tin.

The fuse has a defined current value that blows when an excessive current flows, and a fuse having a size corresponding to the load of each circuit is used.

Therefore, if the fuse is blown, the cause is confirmed and repaired to see if there is a problem with the device or wiring connected to the circuit.

A fusible link is a type of fuse with an extremely large conduction current, and is set to a value such as 100A or 300A.

Generally, it is installed near the battery terminal as shown in Fig. 19, and depending on the vehicle model, the power supply circuit is divided into an ignition system, a headlamp system, a charging system, etc., and a fusible link is provided in each circuit to form one block. It is summarized.

Inspection of the main optical axis

Even if the headlamps are lit smoothly and appear to be lit brightly for the time being, it is not possible to visually judge whether the illuminance or irradiation direction conforms to the safety standards. To check this, use a headlight tester. Here, the inspection of the luminous intensity and the position of the main optical axis by the condensing headlight tester will be described.

First, prior to the inspection, the vehicle is set to the following conditions to prevent measurement error.

Inspect the optical axis using the screen of the tester

Align the measurement point of the tester with the reference position and read the luminous intensity. (Measured at the photometric point of the passing light)