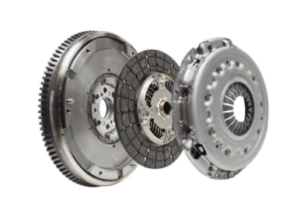 The performance required for the clutch includes the following elements. 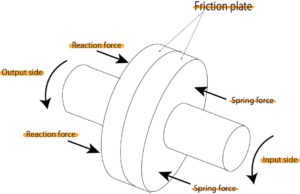 About the clutch spring 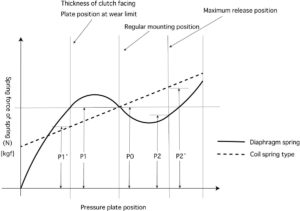 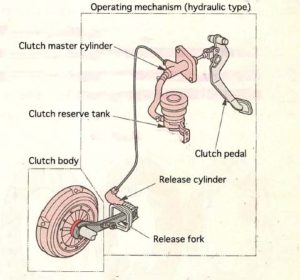 FIG. 3 shows a device for a diaphragm spring type clutch, which is roughly divided into a clutch main body and a clutch operating mechanism. 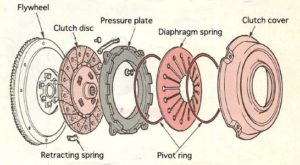 The clutch body is constructed as shown in FIG.
When replacing the clutch, it is normal to order and replace parts 3 to 5 as a clutch cover assembly as an integrated part. The 2 clutch disc is ordered separately from the clutch cover as one part, but it is rare to replace only the clutch disc. It is almost always the case to replace both at the same time.
In other words, if slipping occurs due to wear or malfunction of the clutch disc and it is necessary to replace it, it is possible that the diaphragm spring in the clutch cover assembly may have deteriorated or worn out, or other parts may have deteriorated or worn out. You will have to replace both at the same time.
Also, when replacing the clutch, wear of the flywheel attached to the engine side is also considered, so if there is a problem as a result of the inspection, it is necessary to replace it each time.

The clutch cover is made by pressing a steel plate, and the diaphragm spring and pressure plate are assembled. Normally, it is attached to the flywheel with the clutch disc in between and rotates with the crankshaft (flywheel) of the engine. The connected clutch shaft rotates and transmits the power of the engine to the transmission.

The diaphragm spring is heat-treated after the spring steel plate is press-formed. Due to its structure, the pressure acts on the entire circumference, so the pressure plate is less likely to be distorted, and the clutch can be engaged and disengaged smoothly, so even if the clutch disc wears, the spring force will not decrease. has the characteristics of

The pressure plate is made of cast iron, and like the flywheel, its friction surface is smooth and flat, and rotationally balanced. 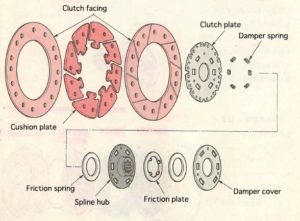 The clutch disk is in uniform double-sided contact with the friction surfaces of the flywheel and the pressure plate, and plays a role of smoothly transmitting torque. As shown in Fig. 5, the clutch facing is riveted via a cushion plate attached to the steel clutch plate, and several coil springs are incorporated as damper springs on the circumference of the spline hub. .
This damper spring absorbs and mitigates the impact when torque is suddenly transmitted from the engine or drive wheels. (shock absorption during shifting)
Further, the clutch facing is required to have a coefficient of friction suitable for its application and to have a property that the coefficient of friction does not change much with changes in temperature. 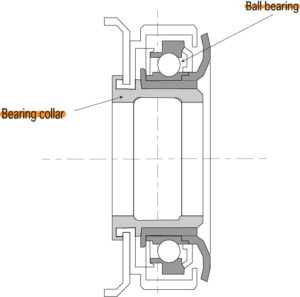 The release bearing functions to transmit force from the clutch pedal to the clutch, which is a rotating body. In general, as shown in Fig. 6, oil-free angular ball bearings filled with heat-resistant grease are used, and the mainstream structure is press-fitted into the bearing collar. 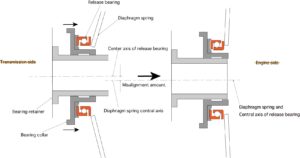 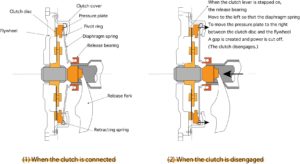 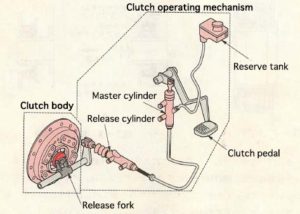 Fig. 8 shows a coil spring type clutch, which is used in medium- and large-sized trucks and buses. 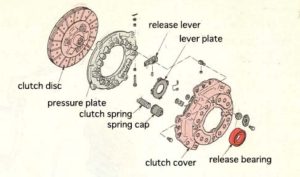 The clutch operation mechanism is a device that engages and disengages the clutch by operating a clutch pedal on the driver’s seat to move a release fork connected to the clutch body, and there are mechanical and hydraulic types. 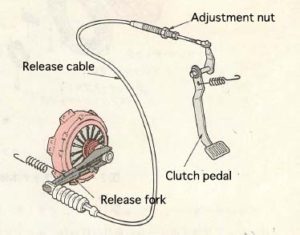 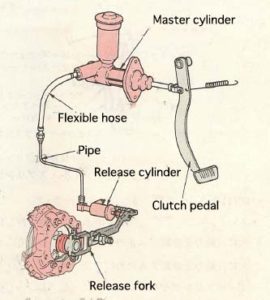 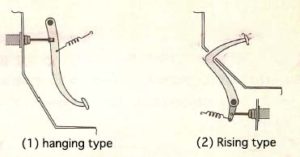 As shown in Fig. 13, there are two types of clutch pedals: hanging type and rising type.
A suspension type is adopted for a general passenger car. Some of the large trucks and buses with high vehicle height adopt the stand-up type.
FIG. 14 shows a cross section of the master cylinder. The master cylinder can be roughly divided into two parts. They are the part of the cylinder where the piston slides due to hydraulic pressure and the part of the reserve tank for storing the clutch fluid.

The master cylinder generates hydraulic pressure for operating the clutch.
In FIG. 14(1), when the clutch pedal is slightly depressed, the piston is pushed and the clutch fluid in the cylinder is sent to the reserve tank. When the clutch pedal is further depressed and the piston moves, the spring retainer attached to the tip of the piston compresses the return spring to its maximum (the state where it can no longer be compressed).
At this time, since the connecting rod is free to move, the inlet valve moves to the left due to the spring force of the small conical spring installed at the tip of the rod, blocking the common inlet return port.
At the same time, the hydraulic pressure in the cylinder rises sharply, and the clutch fluid is sent to the release cylinder to move the release piston.

Clutch boosters reduce the operating force of the clutch pedal, and are used in vehicles such as large trucks and buses that use clutch springs with strong spring force. 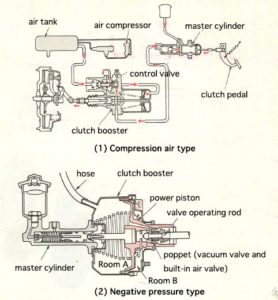 Some of the text on this site has been quoted from the following books, publications, and websites.