Among the gauges in the combination meter, the oil pressure gauge, the fuel gauge, the water temperature gauge and the charge display device (charge lamp) are combined with a sender unit that detects various measured values ​​and a receiver unit that displays to the driver.

These units are classified into several types according to the operating mechanism, but are used in combination as appropriate depending on the application. 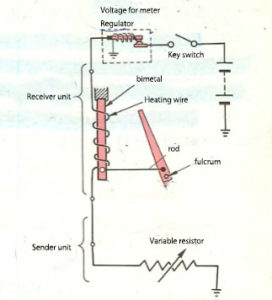 Therefore, as shown in FIG. 10, a voltage regulator for the meter is provided on the power supply side of the receiver unit to prevent an error from occurring. 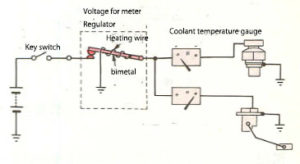 In this operation, when the key switch is turned on, a current flows through each gauge circuit through the contacts of the voltage regulator. At the same time, a current flows through the heating wire of the voltage regulator to heat the bimetal, and after a certain period of time, the bimetal bends, the contacts are separated, and the current to the gauge circuit is cut off.

Therefore, the opening / closing cycle of the voltage regulator changes according to the fluctuation of the power supply voltage, a constant amount of electricity is supplied to the circuit, and the receiver unit is not affected by the voltage fluctuation and prevents the indication error. be able to. 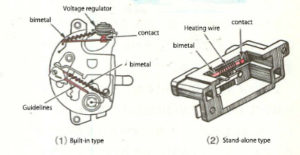 About the fuel gauge as shown in Fig. 13 below 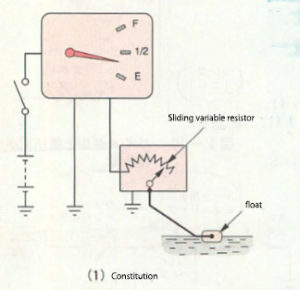 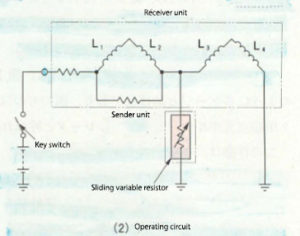 The receiver unit has a coil crossed around a rotor (magnet) and is operated by the magnetic field. 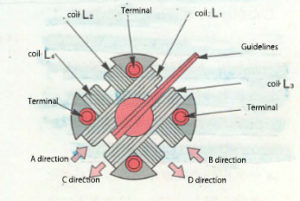 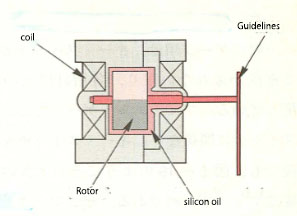 In this meter, in order to control the movement of the rotor, silicone oil is injected around the rotor as shown in FIG. (By balancing with the force of the magnetic field, the behavior and balance of the rotor movement are maintained.) 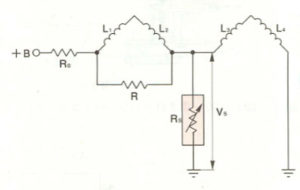 When the resistance value of Rs in FIG. 16 is 0, the voltage Vs is also 0 potential, the constituent circuits are L1 → L2 → ground, and the current is excited only in L1 and L2.

Therefore, the rotor pointer stops at the position of the combined magnetic field of L1 and L2. 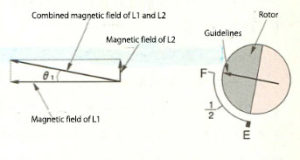 Figure 17: When the resistance value of Rs is 0

When the resistance value of Rs rises, the voltage Vs also rises proportionally, and the circuit configuration becomes L1 → L2 → Rs → ground at the same time as L1 → L2 → L3 → L4 → ground.

Therefore, since current flows through all the coils, L1, L2, L3, and L4 are excited.

When the movement of the pointer of the receiver unit is considered in units of 0 ° to 180 ° (half scale), the combined magnetic field of all coils is as shown in Fig. 18 below, and the pointer of the rotor is on a half scale (angle θ2). ) Stops at the rotated position. 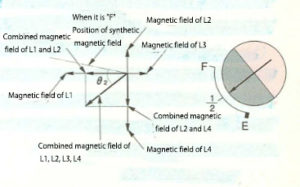 Figure 18: When the resistance value of Rs increases 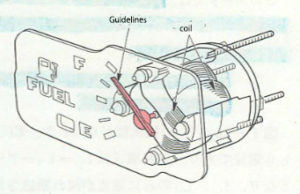 Generally, gauges are in a state where each pointer has returned to its original position unless the key switch is turned on and current does not flow. With a fuel gauge, it is convenient if the remaining amount at that time can be confirmed as shown in Fig. 19, regardless of the key switch. 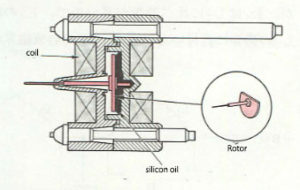 As shown in FIG. 21, the fuel level indicator is composed of an indicator lamp and a thermistor, and lights the lamp when the remaining fuel in the fuel tank is low to give a warning to the driver. 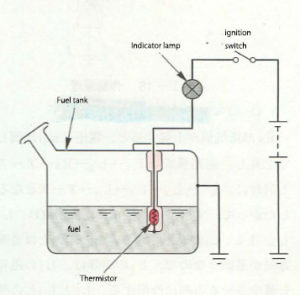 If there is a lot of fuel in the tank, the temperature is low because the thermistor is submerged in gasoline.

Therefore, the resistance of the thermistor is large and the current flowing through the circuit is small, so that the lamp does not light.

When the amount of gasoline in the tank is low and the thermistor is exposed to the outside of the gasoline, the temperature of the thermistor rises and the resistance decreases, so the lamp lights up.

Generally, the thermistor is used by assembling it to a fuel sender unit.