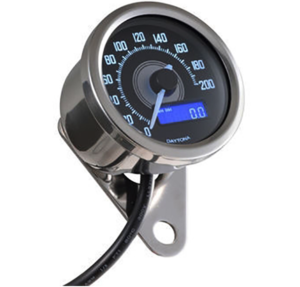 The combination meter has a speedometer, tachometer, fuel gauge, water temperature gauge, various indicators, etc. arranged in one panel so that the driver can check the operating status of each part of the car at a glance, among which analog Combination meters generally have a structure that mechanically indicates numerical values ​​and quantities with pointers.

The meter section of FIG. 1 is provided with an cross-coil speedometer for moving a pointer, an electronic circuit for passing a current through the cross-coil, an odometer for integrating the mileage, a trip meter, and the like.

Many of the vehicle speed sensors of electric speedometers use a magnetic induction element (MRE).

As shown in Fig. 2, this sensor consists of a hybrid IC with a built-in magnetoresistive element and a magnet ring driven by a drive gear (final speed detection) of the output shaft of the transmission.

The magnetoresistive element (MRE) has the property that the magnitude of resistance changes as the magnetic field lines change with respect to the direction of the electric current, as shown in FIG.

Further, since the MRE is arranged around the multi-pole magnet ring as shown in FIG. 4, the direction of the magnetic field lines changes according to the rotation speed of the ring, and a pulse signal is generated.

This signal is converted into a digital signal by the comparator and transistor in the amplifier and sent from the terminal (2) of (2) in Fig. 4 to the electronic circuit of the speedometer.

The output of the vehicle speed sensor is a signal with a 4-pulse period for one rotation of the magnet ring.

In the cross-coil speedometer, when the signal from the vehicle speed sensor is input to the electronic circuit as shown in Fig. 5, this IC counts the pulse of the signal, and the magnitude and direction of the current flowing to the cross-coil according to the vehicle speed. Is changed, and a pointer (magnet) is swung in the direction of the synthetic magnetic field formed by the change to display the speed.

In the cross-coil type meter, two coils are wound 90 degrees offset on the outside of the magnetic rotor as shown in FIG.

As a result, from the electronic circuit, the magnitude and direction of the current flowing through the coils L1 and L2 change like a sine waveform in conjunction with the vehicle speed. Actually, it is a graph of the relationship between the current and the vehicle speed with the phase of the waveform offset by 90 degrees as shown in (1) of Fig. 7.

Fig. 7 (1): Relationship between the current flowing through the coil and the vehicle speed

The mileage is calculated by integrating the signal from the vehicle speed sensor with the rotating pulse motor and the odometer by the drive circuit as shown in FIG.

As shown in Fig. 9, the pulse motor consists of two layers of upper and lower coils, a stator (electromagnet) and a rotor (magnet), and is a motor that rotates intermittently by 15 degrees, and a pulse signal is input from the vehicle speed sensor. Then, the motor drive IC energizes each coil and rotates according to the number of pulses to drive the odometer and trip meter.