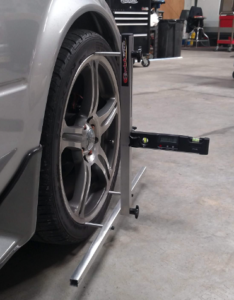 The wheels of the car are provided with angles to allow the car to perform appropriate movements for each of these purposes in order to maintain driving performance such as straightness, turning, and restoring force to the straight state. This alignment between the wheels is called wheel alignment.

Typical elements of wheel alignment include the positional relationship between the front and rear wheels of an automobile, camber, casters, kingpin tilt angle (SAI), toe-in, and the center position of the steering wheel.

The basis of wheel alignment is that each element of the left-right alignment of the front and rear wheels of the automobile works correctly and is set symmetrically.

Nowadays, high-speed driving on highways is becoming more common, and it is important to correctly maintain not only the front wheel alignment but also the rear wheel alignment, which has a great effect on straight-line performance. Alignment as a whole is called total wheel alignment (all-wheel alignment).

If the distance between the front, rear, left, and right wheels shown in FIG. 1 is incorrect in an automobile, the steering wheel will be taken off and the tires will be unevenly worn, which will adversely affect turning and straight running performance. The mutual position of the front, rear, left and right wheels can be confirmed by the distance between the wheelbase and the tread specified for the vehicle. 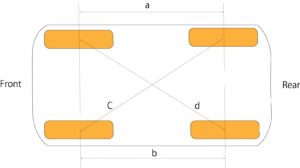 Figure 1: Positions of the relationship between the front and rear wheels 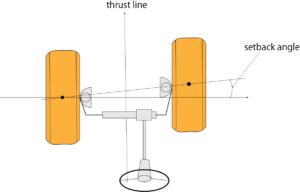 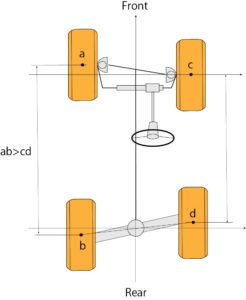 Figure 3: Left-right difference in foil base

The deviation between the front, rear, left and right wheels can be confirmed by measuring the distance between the front and rear treads as shown in Fig. 4 and comparing them with the tread specifications. 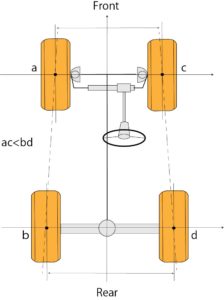 In the past, the main purpose of providing camber was to reduce steering operation, prevent tires from coming off and prevent downward opening, etc., but nowadays, the performance of suspensions, bearings, ball joints, tires, etc. is improved. The role of the camber changes greatly depending on the power steering, etc. In particular, in the case of the independent suspension type suspension, the tires and the road surface are grounded as upright as possible in order to respond to changes in the load of the car, roll motion during turning, and unevenness of the road surface. Therefore, it has been devised to maintain the maximum grip of the tire.

Change in camber when turning

As shown in Fig. 5, the camber of the wheel with respect to the road surface when the vehicle body tilts during turning varies greatly depending on the suspension model. With the axle suspension, the camber changes little, but with the independent suspension, it changes significantly. 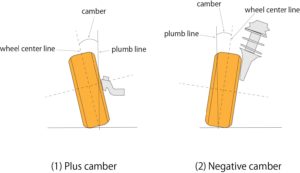 Further, when the wheel has a plastic camber, the ground contact surface of the tire is deformed as shown in FIG. 6, and a lateral force is generated in which the tire tries to roll inside the inclination. This is called canvas last, and it increases as the camber angle increases.

If the left and right cambers are equal, the left and right canvas lasts will be equal when going straight and the force will be offset, but when turning, in the case of an independent suspension, the outer wheel camber is generally large and the inner wheel camber is small. Therefore, the outer wheel has a larger canvas last than the inner wheel.

In this case, the direction of the force of the canvas last of the outer wheel is opposite to the cornering force, so that the force acts in the direction of reducing the cornering force. Therefore, in order to prevent this, in passenger cars, as shown in Fig. 6, the camber when going straight is set to minus, and the camber of the outer wheel when turning is made as small as possible to increase the cornering force and improve turning performance. Some are improving. However, if the minus camber is also made larger than necessary, the straight running stability will be impaired.

Some plastic camber vehicles are also equipped with a camber control mechanism that suppresses the camber change of turning as much as possible by utilizing the arrangement of suspension links and the deformation of the bush used for the suspension links. 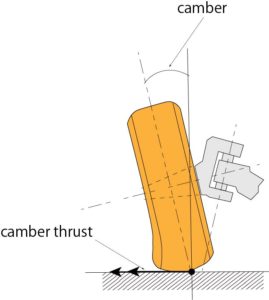 When the front wheel is viewed from the side, the kingpin is slightly tilted forward or backward with respect to the vertical line, as shown in Fig. 9. This inclination is called a caster and is represented by the angle between the kingpin center line and the vertical line. 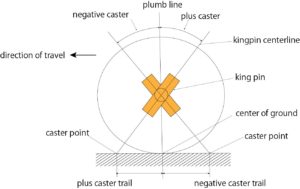 Further, from FIG. 9, the point where the extension line of the kingpin center line intersects the road surface is called a caster point, and the distance in the front-rear direction from the center of the tire contact patch is called a caster trail. 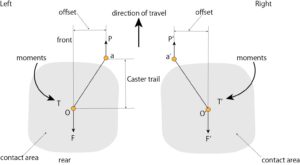 Therefore, if a moment is generated in the wheel, the wheel rolls in the direction of the larger moment, but in this case, the moments T and T’generated around a and a’have the same magnitude and opposite directions, so they cancel each other out. Keep the wheel straight.

Note that a-O and a’-O’are called wheel lever arms, and in reality, this action generates a moment around the kingpin axis.

Therefore, the center of contact with the tire changes so that the right wheel is large and the left wheel is small.

This movement of the tire contact patch, that is, the inclination of the tire contact patch, tries to return to the original state due to the weight of the vehicle itself, and as a result, the moment T’acting on the right wheel increases, so that the wheel tries to return straight. Restoring force is generated in the direction. This action is called the caster effect. 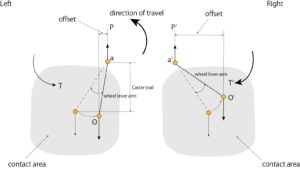 Further, the caster trail of FIG. 10 has a straight-ahead restoring force and an action of suppressing a force that makes the wheel unstable by pulling a force applied to the wheel from the traveling direction. However, in order to lengthen the caster trail, the caster angle must be increased and the wheel lever arm must be lengthened, which increases the offset amount during turning and increases the restoring force, but the operating force required for steering wheel operation. If the number of wheels increases or the sense of unity during driving is lost, the steering feeling will deteriorate.

Therefore, the straightness is shared not only with the casters but also with the tires and suspension, and at the same time, even if the caster angle is constant as shown in Fig. 12, the caster trail can be freely moved by moving the kingpin axis back and forth from the center of the axle. Depending on the setting method, the casters are made smaller to improve the steering feeling. And so on.

Figure 12: How to set the caster trail 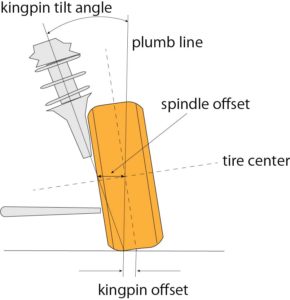 Further, as shown in FIG. 13, the horizontal distance between the kingpin shaft and the tire center is called a spindle offset, and the larger the value of these offsets, the larger the moment around the kingpin.

Considering the case where there is no kingpin tilt angle, the offset amount (A) becomes large as shown in Fig. 14, and the load of the vehicle body acts as a force to directly bend the kingpin. 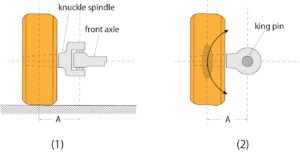 Figure 14: When the kingpin has no tilt angle

Further, since the running resistance acts on the center of the ground contact surface of the tire, a force acts on the wheel to rotate the wheel in the direction of the arrow in FIG. 14 around the kingpin during running and braking. This force acts to swing the wheel back and forth during running and braking, and the force from the road surface is directly transmitted to the link mechanism of the steering device, resulting in a problem in steering operation.

Traditionally, toe-ins have been used primarily to prevent the front of the wheel from trying to widen outwards due to the plastic camber, but with the minus camber, the performance of suspensions, bearings, ball joints, tires, etc. has improved. The main purpose is to ensure straight-line stability.

Toe-in and side slip

When the toe-in is provided, an inward thrust force is generated on the tire as shown in FIG. In addition, even those that use a minus camber generate inward thrust force, which becomes a combined thrust force and appears as a side slip, so it is not possible to provide a very large toe-in on the front wheels. 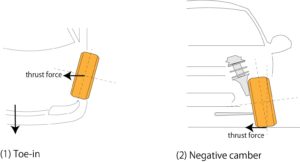 While driving, the center of the axle moves up and down in an arc depending on the top and bottom of the tire. At this time, the tie rod also moves in the same way, but the tie rod is key.

Due to the influence of the angle of inclination of the ngpin, the toe changes by moving differently from the center of the axle. 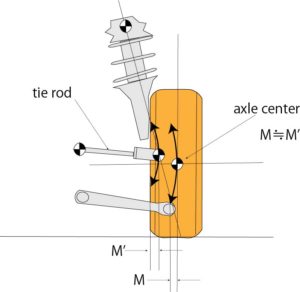 When there is a kingpin tilt angle, the vehicle body is lifted by steering, which changes the angle of the suspension arm and tie rod. 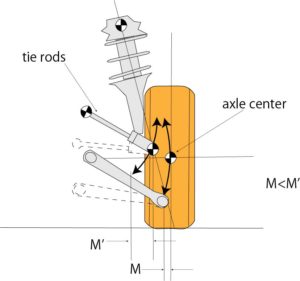 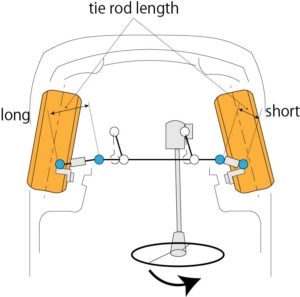 Toe and all wheels going straight

When a car goes straight, the factor that determines the straight direction is the toe of the front, rear, left, and right wheels.

Generally, these measurements will be made with a dedicated four-wheel wheel alignment tester. 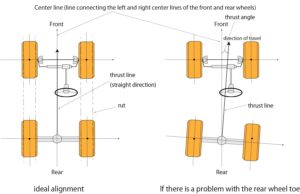 Figure 22: Ideal alignment ・ When there is a problem with the rear wheel toe

Grease Monkey
Suspension system
https://katuhito.info/en/suspention
Suspension systemTable of Contents The role and type of suspension Invention of pneumatic tire The role of wheel alignment and suspension Rigid axle and independent suspension Rigid axle Independent suspensionThe role and type of suspensionWhen the car on which people ride was the first in the world to appear in the form of a carriage, springs were already used in the carriage as a suspension.Since the first Mercedes-Benz four-wheeled vehicle had a gasoline engine attached to the carria...

This site is based on the references listed below.