Disc brakes. Because of its excellent cooling performance and stable braking force even at high speeds, it is used almost 100% on the front wheels of passenger cars. 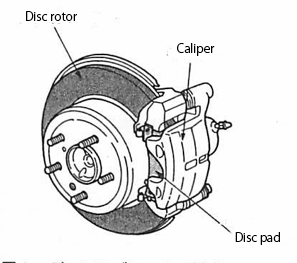 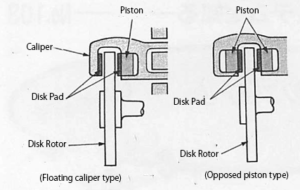 The floating caliper type has only one piston on one side, and when brake hydraulic pressure is applied, the piston is pushed out and the caliper moves with the cylinder to the opposite side, so the pads on both sides crimp across the disk rotor . This operation is the reason why it is called a following (floating) caliper type.

The floating caliper type can be mounted on narrow wheels, so it is often used for small cars. 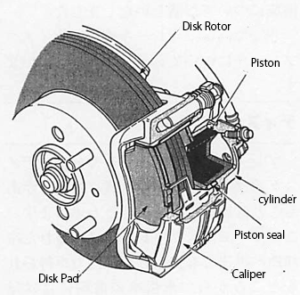 The floating caliper type includes a disc rotor, a caliper that slides in a lateral direction, one cylinder and a piston provided on one side of the caliper, a pad that sandwiches the disc rotor, and the like. 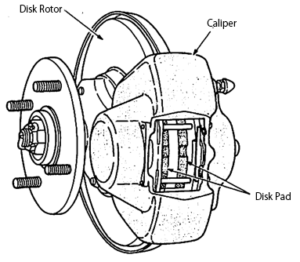 The opposed caliper type is composed of a disc rotor and a fixed caliper, and cylinders are attached to both sides of the caliper. When the brake oil pressure is applied, the piston, that is, the pad, is pushed out from both sides to pinch the disk rotor and generate a braking force.

As a means for improving the performance of a disc brake, there is a method called “enlargement of a disc rotor”. So why do we need to enlarge the disk rotor? ? 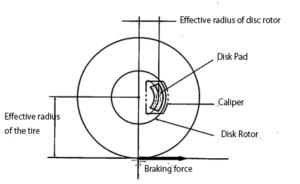 To increase the braking force, there is an idea to increase the pressure receiving area of ​​the caliper piston. However, if the pressure receiving area of ​​the piston is increased, the effective radius of the disk rotor (the distance from the center of the disk rotor to the center of the piston) decreases. The problem that occurs.

Therefore, the effective radius of the disk rotor can be increased by making the pad slender without changing the pressure receiving area of ​​the piston with two pistons on each side. The so-called 6-piston caliper is a further development of this concept, with three pistons on each side. (Fig. 6) 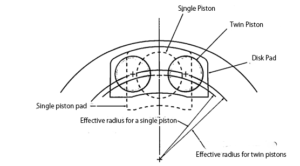 One of the features of the disc brake is that there is no cell portion servo action unlike a drum brake, and a stable braking force proportional to the pedaling force can be obtained even at a high speed. However, in practice, there is some self-servo, and the force for slightly pressing the inlet side (leading side) against the rotation of the disk rotor increases. (Figure 7) 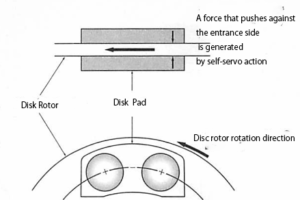 Therefore, there is a case where the piston on the inlet side is made slightly smaller to equalize the pressing force of the pad. (Fig. 8) 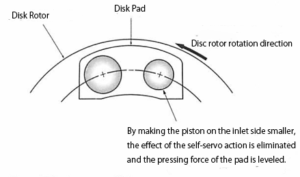 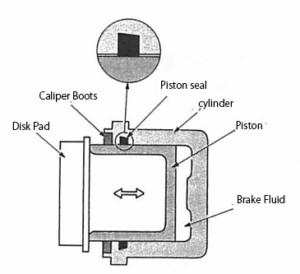 The cylinder and the piston are mounted on the caliper so as to sandwich the disc. A soft rubber boot is incorporated at the end of the cylinder to prevent moisture and foreign matter from entering the piston. (Fig. 9)

At the back of the boot, a rubber piston seal is housed in a groove on the inner wall of the cylinder, and the seal holds brake hydraulic pressure.

The automatic adjusting device always keeps a constant gap with the disk rotor even when the pad is worn, and the actual adjustment of the gap is performed by a piston seal when the brake is operated / released. 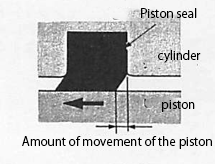 When the brake is activated, the piston is pushed out while deforming the piston seal, applying pressure to the pad. (Figure 10)

Figure 11: Piston seal activation (when hydraulic pressure does not operate)

When the brake oil pressure is no longer applied, the piston seal returns to its original shape, so that the piston is pulled back by that amount, and a gap is maintained between the piston seal and the disc rotor. (Fig. 11)