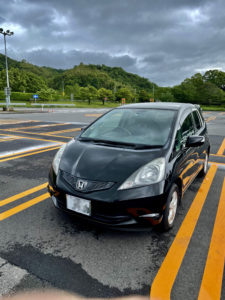 The air conditioner does not work while driving

When the engine is started from cold, the magnet switch and condenser fan are turned on, and the air conditioner is activated. The effectiveness from that state is stable. However, at the timing of idling after long-distance driving from that point, the magnet switch does not turn on, the compressor does not rotate, and the air conditioner does not cool. (The condenser fan works normally.)

The magnet clutch relay is placed sideways at the top of the three relays in the relay box in the center of the photo.

The first suspected cause of the magnet switch not working properly is a malfunction of the air conditioner relay. There is a relay box under the washer tank water inlet on the front left side of the engine room, so replace the three magnet clutch relays at the position shown in the photo with new ones and take a look at the situation for a while. This seems to fix most of the time, but this time it didn’t work. (See the photo below for the genuine relay number) 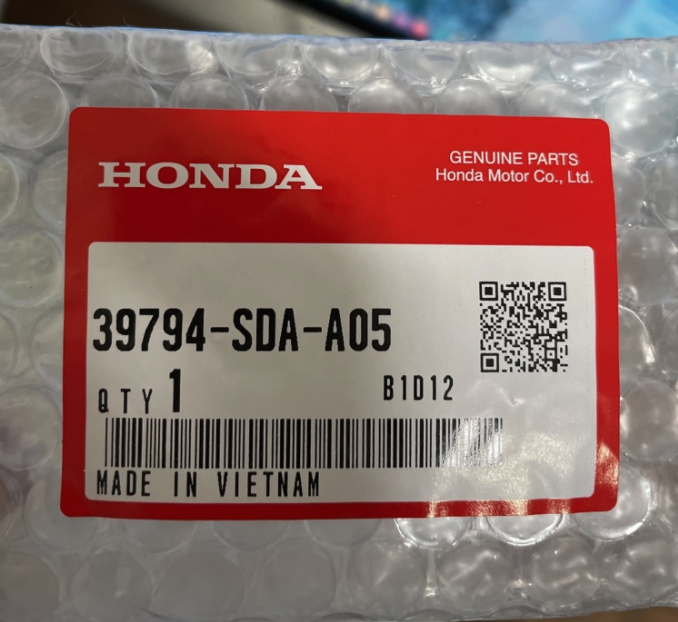 Generally, an air conditioner controls ON / OFF of a magnet clutch relay by controlling a signal of a pressure sensor provided in an air conditioner pipe and an ECU. The timing of this switching becomes frequent, or the electromagnetic clutch inside the magnet clutch gets hot during long-distance driving, so the attractive force of the electromagnet (solenoid) decreases, and the clutch itself cannot be attracted. is not it. ?? ??

Another cause of this problem is that the air gap (gap with the fan belt pulley) of the magnet clutch is too wide due to deterioration over time. 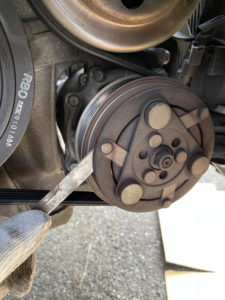 If you jack up the car and remove the undercover, you can measure the air gap of the air conditioner compressor / magnet clutch with a thickness gauge. The measured value at this time was about 0.8 mm, and it was confirmed that it was visibly widened. 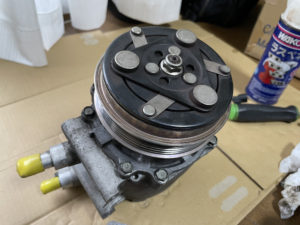 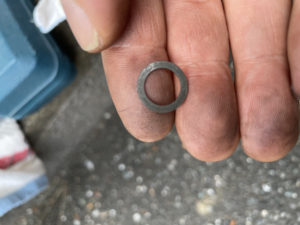 I was wondering if this was a washer, but the strength is also delicate for a washer, and although it is small and does not look good, the characters are printed on the surface. It doesn’t seem to be a washer for the time being. If this is removed and assembled, the air gap can be reduced. 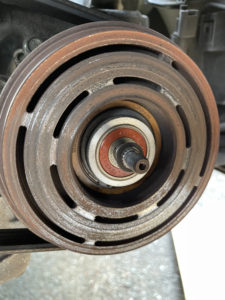 A shim is attached to the center of the shaft.

The same shim was also attached to the magnet clutch before replacement, so without removing the fan belt as it is, loosen the washer nut (14 mm) at the center of the magnet clutch with the compressor attached, and remove the clutch. I intended to reuse the plate as it is, so I decided to remove only the shim and reassemble it to see how it looks. (The measured air gap at this time is 0.4 mm)

Reassemble everything, lower the car, start the engine, test run, and then idle for a while. Then, at first, it was operating normally, but after about 30 minutes, when the clutch was turned on, there was a squeaking noise of metal. ?? ?? Furthermore, the sound has begun to change into a continuous sound. (Is the air conditioner working?) Apparently the clutch plate is slipping when synchronizing with the compressor pulley. 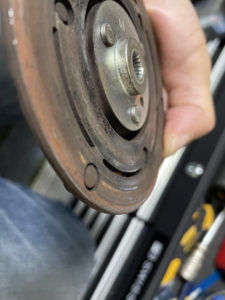 The original compressor clutch plate. The plate is worn until the rivet is in surface position.

When I jacked up the car again and inspected it, the rivet part on the back side of the clutch plate was protruding at the last minute position, and it was no longer usable. There is a clear lack of confirmation.

The condition of the magnet clutch does not change much whether it is a current car or a used one. If so, it doesn’t make much sense to replace only the clutch with an assembly, and even if it can be repaired, it won’t last long. In the first place, the fact that the metal slips like a squeak or a squeak means that the frictional force between the clutch plate and the pulley on which the belt is applied when the magnet clutch is turned on is not the same. In other words, when the clutch is turned on, the pulley with the fan belt on the compressor itself may not be fully rotated. I have to use a used clutch plate for future repairs, but in order to synchronize the plate and pulley well … ?? ??

Oh, by the way, I haven’t replaced the fan belt for a long time …

So, when I removed the fan belt, ordered a new one, and compared it, it was visually stretched by about several millimeters. I wasn’t really aware of it because there were no cracks in the belt itself. I immediately replaced it with a new fan belt and finished the work.

After that, as a result of repeated test runs, the clutch noise disappeared, and now the air conditioner is completely free of abnormalities. It’s cold comfortably. However, since the mileage exceeds 200,000 km, it may have been necessary to replace the compressor body as well, but I decided to keep the used compressor body in stock for the future and completed this repair. ..