As shown in Fig. 1, the car air conditioner basically uses the functional parts of the heating device and the cooling device, and the heat exchangers (heater core, evaporator) are housed in the same case for each. The blowout temperature can be controlled not only for heating and cooling but also for intermediate temperatures.

Therefore, when the temperature is low and the humidity is high, a comfortable environment without a feeling of cooling can be created by lowering the temperature with an evaporator to condense and dehumidify the moisture in the air and warming with a heater core. 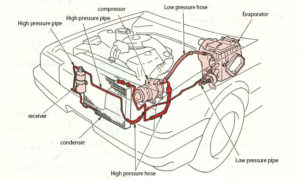 The set temperature of the air conditioner selects whether to strengthen the heating or cooling function according to the temperature conditions at that time.

In the manual air conditioner, the method of strengthening this heating / cooling function is adjusted by the temperature setting lever to adjust the blowout temperature. 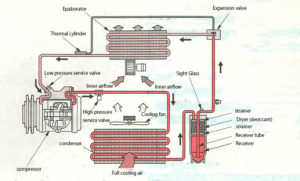 Functional parts that make up the air conditioner cycle 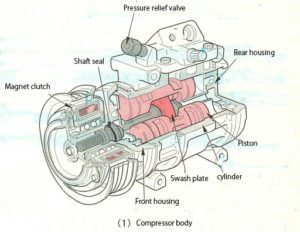 As shown in Fig. 5, the compressor (swash plate type) moves the piston left and right by rotating the swash plate to suck, compress, and send out the refrigerant. Three pairs (6 cylinders) or 5 pairs (10 cylinders) of pistons. However, it is set diagonally with respect to the shaft by the swash plate. 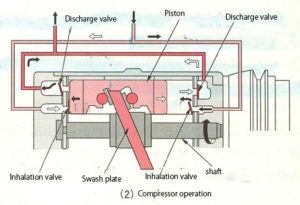 In this type of compressor, when the shaft rotates, the piston reciprocates in the same direction as the shaft by the swash plate as shown in FIG.

Cylinders are arranged on both sides of the pair of pistons, and when one side is in the compression stroke, the other side is the suction stroke, and each stroke cycle is determined by the number of cylinders. 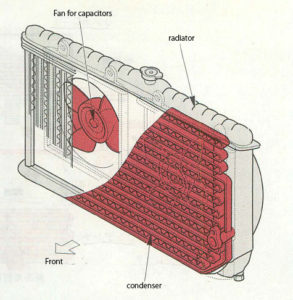 The capacitor is for cooling the high-temperature and high-pressure gaseous refrigerant pumped from the compressor into a liquid refrigerant. It is composed of tubes and fins, and unlike the radiator of cooling water, it does not have an upper tank and a lower tank. Further, as shown in FIG. 7, it is attached to the front surface of the radiator, and the high-temperature and high-pressure gaseous refrigerant passing through the tube is converted into a liquid refrigerant by the cooling action generated by the condenser fan and the front cooling air generated by running passing through the fins. I’m urging you to do it. (See Figure 4 = link) 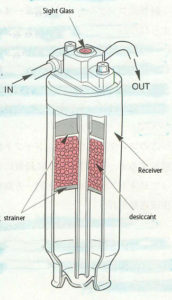 The receiver has a structure as shown in Fig. 8, and the refrigerant liquefied by the condenser is temporarily stored so that it can be supplied to the evaporator according to the cooling load. The gas and liquid in the refrigerant are stored. It serves to separate.

In addition, a strainer and a desiccant are sealed inside the receiver in order to remove dust and moisture in the refrigeration cycle.

Moisture during the refrigeration cycle may corrode each functional component or cause freezing in the pores of the expansion valve, impeding the flow of refrigerant. 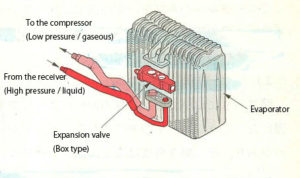 The expansion valve is as shown in Fig. 9, and has the following two functions.

In order to fully utilize the capacity of the evaporator, the liquid refrigerant must take away heat from the surroundings and always keep it in a state where evaporation is completed at the outlet of the evaporator.

The basic mechanism for adjusting the amount of refrigerant is the opening and closing of the diaphragm chamber of the expansion valve and the needle valve directly connected to it.

In FIG. 10, the refrigerant gas is sealed in the A chamber of the diaphragm chamber.

The pressure in chamber A is high when the refrigerant temperature near the outlet of the evaporator is high, and low when the temperature is low. 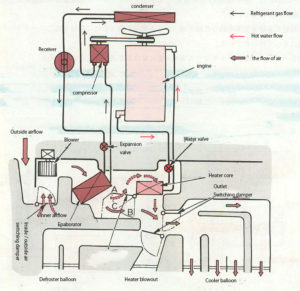 In FIG. 11, the air flowing by the rotation of the blower is deprived of heat when flowing through the evaporator, becomes cold, and flows toward the radiator (heater core).

There is an air mix damper between the evaporator and the heater core, and its opening angle can be adjusted by the temperature control lever.

When the temperature is set to the maximum cooling position, the air mix damper closes the position (A), that is, the passage to the heater core, and all the cold air is blown out through the air mix chamber without being warmed. It flows from the mouth into the room to cool it.

Next, if the temperature is set to the maximum cooling position, the air mix damper will be in the position (B), and all the cold air will pass through the heater core, so it will be warmed here and flow into the room to heat it. conduct.

In this way, in the air mix method, the amount of hot air and cold air is controlled by operating the air mix damper to adjust the room temperature.

The outlet is selected by operating the lever of the outlet switching damper. 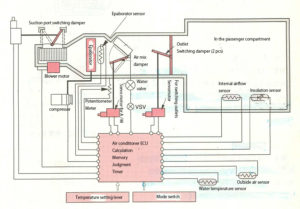 FIG. 12 is a control system diagram of an automatic air conditioner by ECU control.

The control unit controls the room temperature by determining the operation of the auto air conditioner, that is, “opening of the air mix damper, switching of air volume, switching of suction port and outlet, control of compressor”, etc. from the input information. There is. 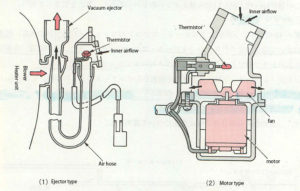 The internal air temperature sensor shown in Fig. 13 takes in the air inside the vehicle, detects the temperature with a thermistor, replaces it with a resistance value, and sends it to the control unit. Some use an aspirator to use the air flow of the heater unit, while others use a dedicated fan motor as shown in Fig. 13 (2). 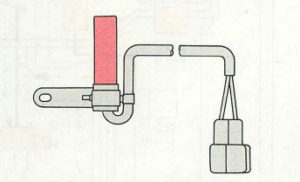 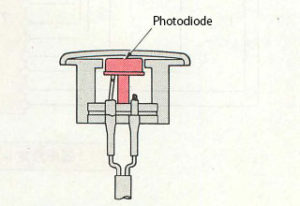 The solar radiation sensor shown in FIG. 15 uses a photodiode whose resistance value changes depending on the amount of solar radiation, and is generally attached to the upper part of an instrument panel that is easily affected by solar radiation. 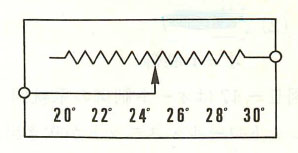 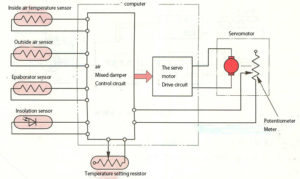 FIG. 17 is a block diagram of blowout temperature control.

The set resistance (desired temperature) set by the temperature setting lever and the signals from the internal temperature, outside air temperature, solar radiation, and evaporator sensors are input to the air mix damper control circuit. 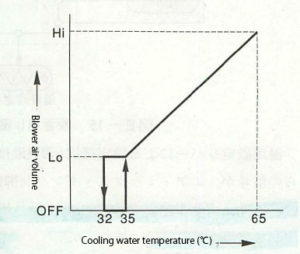 FIG. 20 shows an example of the relationship between the blower air volume of warm-up control and the cooling water temperature. 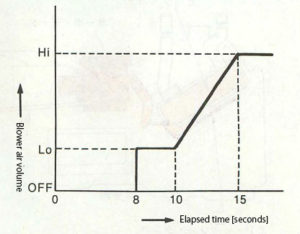 FIG. 21 shows an example of the relationship between the blower air volume for controlling the blower delay air volume and the elapsed time.

The outlet is in FACE (face) mode, and immediately after the compressor is turned on, it is a control to eliminate discomfort to the face due to warm air blowing.

After starting the blower motor, it is controlled by Lo for about 2 seconds to protect the power transistor from the starting current. 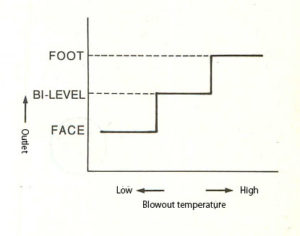 Not only can each control item such as blowout temperature and air volume be automatically controlled, but each servo motor can be controlled by the control switch on the air conditioner control panel and manually controlled arbitrarily.