Since the air conditioner is originally an air conditioner, it does not matter if it is used all year round, but cases where goods are received due to problems such as the air conditioner does not get cold are mostly summer. Because of the unusual weather nationwide every year, there are extremely hot days and humid cloudy days. For that reason, many users appeal to air conditioner troubles. However, it seems that there are still cases where outsourcing to the automotive electronics industry is unlikely when repairing air conditioners. This may be outsourcing for reasons such as repair failure and complications, but unexpectedly the specialty of air conditioners is not a mechanic, it is thought to be a specialty in the automotive electronics industry. And there are still many mechanics who have little experience in repairing air conditioners. If you think that such a silly thing, you should listen. About half of the mechanics can not answer properly.

Because it was not explained in detail in the text of the car mechanic level 3 level, and in the case of myself in the case of the second grade mechanic, a less detailed course was not done. Depending on the company’s policy of working, if it is said that all outdoor air conditioning repairs are outsourced, mechanics who work there will have little opportunity to repair the air conditioner. Also, considering considerable capital investment in equipment and equipment for repairing air conditioners, considering matching profitability and considering that most air conditioning repairs will concentrate in the summer as mentioned above, It is no wonder that a mechanic who is not experienced will come out.

So here we introduce simple failure cases while keeping basic points in mind so that we can compensate for lack of knowledge on air conditioner and its repair. 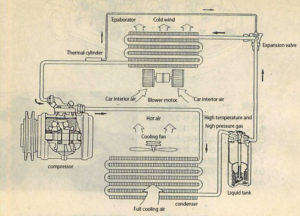 The above figure shows the refrigeration cycle of a car air conditioner, which always comes out in the mechanic’s text etc. Let’s briefly explain the role of each part as research on how each part works.

It is probably a compressor that you will first be reminded of when you hear air conditioner repair. It is a machine that compresses literally, but here it compresses the air conditioning refrigerant to make it a liquid to a liquid.

As a basic knowledge, gas usually turns into a liquid when compressed. When a certain pressure is applied at a certain temperature, the refrigerant changes from a gas to a liquid. When undisclosed air conditioner refrigerant can is shaken, it can be seen that it is in a liquid state, because it is filled in a can with a certain pressure, it is necessary to keep it in a cool place as much as possible. It should have been specified to keep at 40 ° C or below.

Also, if you try to boil water at a summit with low atmospheric pressure, you know that boiling at 100 ℃ or less. For example, the pressure at the top of Mt. Fuji is about 480 mmHg and it boils at about 87 ° C.

Compressive capacity of the compressor

Many appeals from users have an abnormal noise problem. One case was caused by V belt. When you remove it to replace the belt kind by car inspection etc., it should normally be circular, but only a part of the belt is deforming and it is deformed, this slight deformation can not be said as “Vienna” or “Vienna” either It was a source of such sound. In addition, too much air-conditioning refrigerant is put in the system line, air enters into the system line, gobbling sound comes out, compressor oil leaks, sticks to the clutch part and sounds like “Vienna, Kashashu” Depending on how you hear the abnormal noise you need to think about how to solve it as well.

A thing like a radiator is a capacitor, and a tubular item on the left in front of it is a liquid tank

The refrigerant is sent to the condenser in the state pressurized by the compressor, and is cooled individually and changed into a liquid. The refrigerant emits heat when compressed by the compressor. It is the most important role of condensers and cooling fans to cool and liquefy this hot refrigerant as soon as possible. Because it takes away heat when liquefying, this is why it is very hot as you approach the car that is turning on the air conditioner.

Aside from the old car, there are cars that overheat when you put air conditioner, which is related to the cooling capacity of the radiator, in this case it is necessary to remodel the radiator body to improve the cooling capacity . However, not all cars will improve the heat with that. When dealing with old-fashioned cars, it seems necessary to take some method to lower the temperature of the air conditioning system itself.

As troubles, poor cooling due to a cooling deficiency due to a decrease in the number of revolutions of the cooling fan and the condenser main body, etc. may be considered. Even though there are electric fans, this will be the case when it will cool down if you drive but it will not cool at all if you get congested. However, this symptom can be said when the compressor’s ability has declined.

The manifold gauge pointer in this state will be high (21 to 23 kg / cm 2) on the high pressure side and slightly higher (about 2.5 kg / cm 2) on the low pressure side. In such a case, there is a cause in such a case if the manifold gauge indicates normal value by spraying water on the condenser or the like and the temperature of the air outlet of the air conditioner lowers (cools) You can look at it.

It seems that many of the capacitors are blocked due to contamination by compressors and scratches induced by mechanical troubles such as compressors. If you inspect the capacitor and it is discovered, you need to thrust another one and pursue the cause of the clogging itself. There are cases where dirt or the like adheres to the fins and the cooling capacity is lowered, so we recommend that you clean it on time. There is also a method of using a strobe lamp for inspection concerning a decrease in the rotation speed of the cooling fan.

And serves to receive the refrigerant liquefied by the capacitor and serve to temporarily keep the refrigerant in order to appropriately supply necessary and sufficient refrigerant to the expansion valve. It contains a desiccant for removing moisture which is an enemy of the air conditioning system and a strainer for removing dust. It needs to be exchanged periodically to serve as a so-called filter. 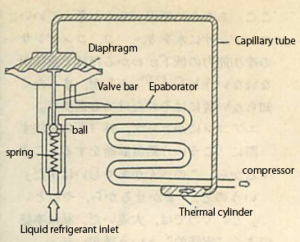 When the refrigerant compressed to a high pressure is rapidly expanded (expanded) by this expansion valve and discharged into the evaporator, the pressure applied to the refrigerant lowers at once, so that the liquid refrigerant vaporizes It will be.

Here, the refrigerant discharged from the expansion valve is completely vaporized (evaporated). In order for the liquid to change into a gas, a heat quantity called vaporization heat is necessary, and the evaporator removes this heat quantity from the surrounding air, so it is cooled. (For example: same as the principle that felt cool when painting rubbing alcohol on the skin) “It absorbs the surrounding heat when the liquid changes to a gas, and releases heat when the gas turns into a liquid”. Then, if you take the heat from the surroundings and send the wind with the blower motor from behind the cooled evaporator, cold air will come out from the blowout port, and so on.

Regarding the dehumidifying function of the air conditioner, for example, if you put cold beer out of the refrigerator and put it on the table, it is the same as coming with water drops around it, moisture in the air condenses on the chilled evaporator, And is discharged from the drain hose to the outside of the vehicle.

Due to the composition of the air conditioning system, the evaporator is dirty with dust and dirt. It is said that it will become moist and it will become a dam of pathogenic bacteria also from the health aspect. For this reason, it is necessary to periodically replace the air conditioner cleaner in the cooling unit. Also, in older vehicles without air conditioner cleaners, it is necessary to clean them from gaps with a cleaner, or to disassemble by removing the evaporator by disassembling the cooling unit.