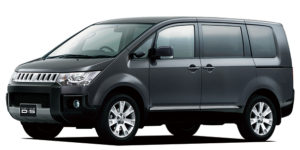 Below is a system diagram of the fuel control system of the Delica D5 4B12 engine and the terminal diagram of the engine ECU, and a description of the various sensors and actuators. 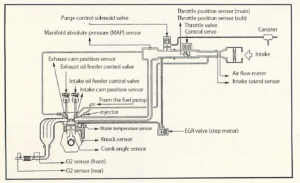 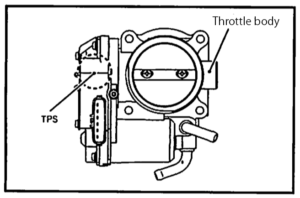 Structure and operation of TPS 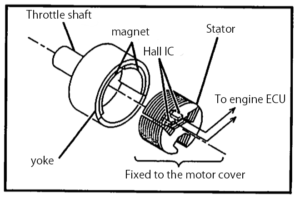 From the structural diagram of TPS, it is composed of a permanent magnet fixed to the throttle shaft, a Hall IC outputting a voltage according to the magnetic flux density, a stator for efficiently guiding the speed from the permanent magnet to the Hall IC, and the like. 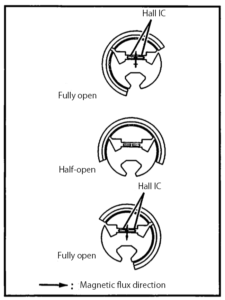 According to the operation principle diagram of TPS, the magnetic flux density passing through the Hall IC and the output voltage are in a proportional relationship, and there are two systems of TPS (main) and TPS (sub), which are output to the engine ECU. Since the main and sub output voltages change as the throttle valve rotates, this allows the engine ECU to detect the actual throttle opening. (Calculate the throttle opening angle from the difference between the main and sub output voltages)

The engine ECU also compares the main and sub output voltages to check if there is any abnormality in TPS. 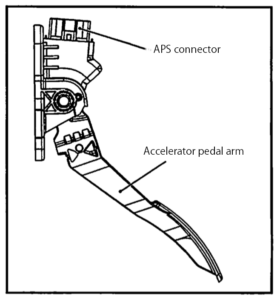 It is integrated with the accelerator pedal and detects the accelerator opening. The engine ECU controls this sensor so that it has an appropriate throttle valve opening and fuel injection amount based on the output voltage of this sensor.

Structure and operation of APS 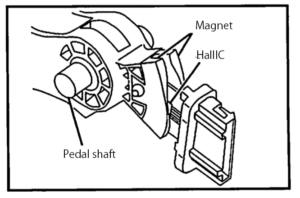 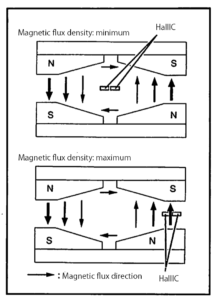 The magnetic flux density passing through the Hall IC and the output voltage are the same as TPS and in a proportional relationship, and the output has two systems, APS (main) and APS (sub), which are output to the engine ECU. Since the main and sub output voltages change according to the depression of the accelerator pedal, the engine ECU detects the depression amount of the pedal and the appropriate throttle valve opening degree and fuel injection amount according to the main output voltage. Control to become

Also, as with TPS, the main and sub output voltages are compared to check if there is any abnormality in the sensor. 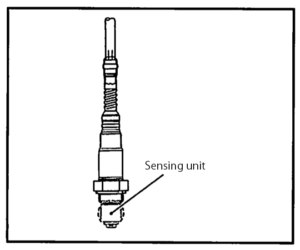 It is attached to the front and rear two places near the catalyst (catalyst) converter. And the heater is built in in order to raise temperature and activate a sensor early. As a result, air-fuel ratio feedback control can be performed in a short time immediately after startup. 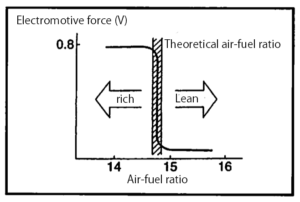 It is mounted on the exhaust side of the cylinder block and detects oil pressure by means of a contact switch. The engine starts, the oil pressure rises, and when the pressure exceeds the specified value, the switch contact opens and the engine ECU detects the oil pressure and outputs an OFF signal to the combination meter to turn off the oil pressure warning light. 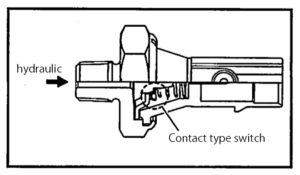 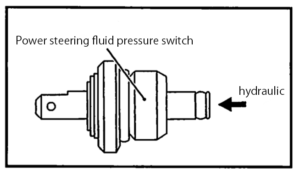 Based on the information on voltage signals from each sensor, the engine ECU calculates and controls the fuel injection amount so that the optimum air-fuel ratio can be obtained according to the operating condition of the engine which changes according to the load and so on.

This is actually controlled by the injector drive time (injection time), and the basic drive time is determined according to the engine speed and the intake air amount as the base.

The engine ECU determines the fuel injection time in addition to the correction that is determined according to the conditions such as the intake air temperature and the engine coolant temperature during the basic drive time. Since the injection timing is performed for each cylinder, it will be once for every two engine revolutions. (Relationship between camshaft and crankshaft)