This is an example of an overheat failure of a Honda Fit with a mileage of over 200,000 km. 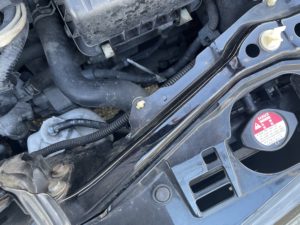 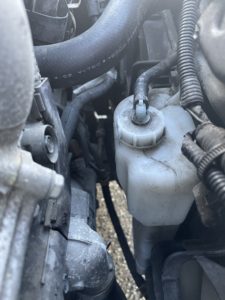 Think about the cause while searching the net

When I got home, I thought about the cause while checking the current car and searching the Internet. After confirming and inspecting the current car, it was determined that there was no abnormality in the amount of water in the radiator sub-tank, the electric fan of the radiator, and the condenser fan. I can’t confirm. When I searched the internet, I found information that it was suspicious that the thermostat did not open, but I heard of a failure case where the thermostat did not open and caused overheating. In the first place, isn’t the thermostat going to stay open if it breaks down? ?
There was also information that the water temperature sensor itself may be abnormal, but if that was the case, other symptoms should have appeared in the engine, so I judged that there was no abnormality. 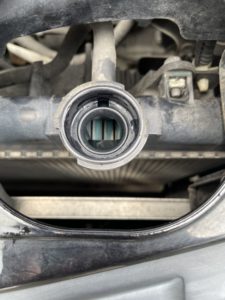 There’s no cooling water… Slowly open the cap of the radiator sub-tank. 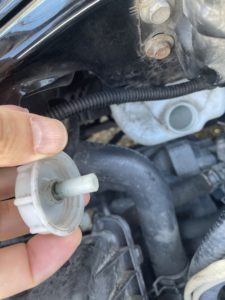 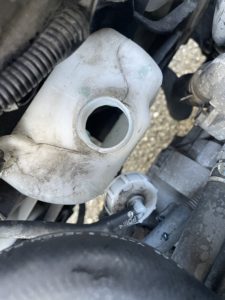 Take a peek inside the subtank… Surprisingly, it was submerged in the cooling water of the sub-tank! ! 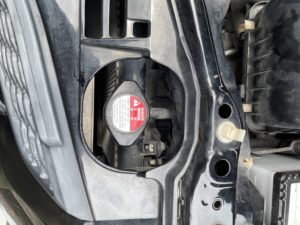 I took out the hose that was submerged in the cooling water of the radiator sub-tank using long nose pliers and a flathead screwdriver. The submerged hose, which was supposed to be attached to the sub-tank, had swelled up due to deterioration, and could not be inserted and came off easily.

So, I turned the hose over and fixed it by inserting the non-swollen tip into the cap. I think it’s good to lightly tighten it with a hose band that fits the size. 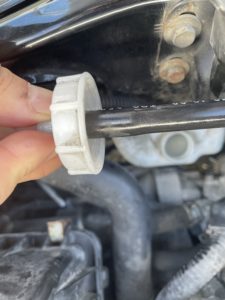 After this, I replenished the radiator with tap water, but I made a mug and drank nearly 2 liters. It was a really dangerous situation.
After that, start the engine and fully open the heater to bleed air from the cooling water, then monitor the water temperature during a test drive to make sure that it does not overheat and that the amount of cooling water in the sub-tank has increased. I parked it in the parking lot, and the next morning, when the engine was cold, I confirmed that the water level in the sub-tank had decreased, and the repair was completed.
The overheating this time was a careless mistake caused by not noticing minor problems during daily inspections, even though the mileage was over 200,000 km. In a car engine, the parts that are normally attached must be naturally attached. It made me keenly aware that performing basic inspections on a regular basis, rather than carelessly inspecting them, is the key to preventing serious failures and accidents from small mistakes like this one.
Also, it is very dangerous to just accept failure repair examples on the Internet as they are, so it is important to think carefully and cultivate an eye to determine the condition of the vehicle in front of you. I was made to realize that once again.

You can easily monitor vehicle information such as engine speed and water temperature by communicating with the adapter that can be connected to the OBD2 connector from the smartphone application using Bluetooth or Wifi. There are various other apps and adapters, and above all, it is compact, easy to use, and has excellent cost performance, so why not try using it as if you had it in your pocket? 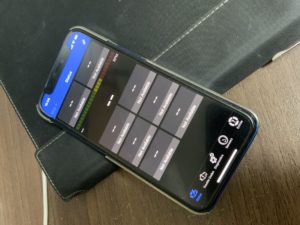 Application example (iphone, android)
– OBD Auto Doctor car scanner (iphone) : https://apps.apple.com/jp/app/obd-auto-doctor-car-scanner/id908897183
– OBD Auto Doctor car scanner (android): https://play.google.com/store/apps/details?id=com.obdautodoctor&hl=en&gl=US
If the dedicated adapter is Bluetooth specification, there are several available that are compatible with the above app. It seems that the adapter you are using has been discontinued, so please search the internet and use an adapter that fits the dedicated application.