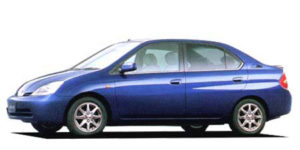 It is Toyota Prius’s car inspection receipt. Originally maintenance of gasoline cars and diesel cars was the main reason, I heard about the dangers of handling electricity and handling precautions in order to have a power supply of 300 V at workshops, etc. I also went to the electric workshop of weak electricity and studied . Even if it says a car inspection, this time, I did not touch the motor part of 300 V, and it took us to improve the normal engine part and the brake part.

I started changing the engine oil and filter and checking the belts, but as I was told that this engine will automatically stop and restart automatically, the key I thought was nothing but it was in the OFF state, but once I pulled out There was. Since I touch it for the first time, it is better to keep in mind just in case.

After removing the engine oil, remove the undercover and check the fan belt which is hard to see with from above, there was no alternator. Naturally speaking it is natural, since the steering system is electric power steering, there is no par steering pump, only one air conditioner compressor and only one belt driving the water pump are attached. Because of that, unlike the familiar engine layout, the front part of the engine is clear. When looking for the starter motor, the mounting opening was covered with iron plate, not in the place where it should be attached to the conventional 1NZ type engine.

Because there is no alternator and electric power steering, only one belt driving only the air conditioner · compressor and water pump is attached.

Because there is no alternator and electric power steering, only one belt driving only the air conditioner · compressor and water pump is attached.

The structure around the brakes was the same as for ordinary gasoline cars, and there was not any change that took it. The Prius had heard that regenerative braking would work for motor drive, but that was right. If it is a normal FF (front wheel drive) car, if you drive for 40,000 km, the third of the wear is worn, but the brake pads on the front wheels seems to be brand new, the rear wheel brake lining There was almost no abrasion lake and it seemed like a brand new item.

Although it started working on brake fluid replacement, it seems to be a type that pressurizes with the electric pump and sends out the pressure as accumulator pressure rather than the conventional negative pressure type Hydro Master Back. Therefore, we asked the manufacturer / dealer to copy the maintenance document and followed the procedure. Conventionally, in the case of this car, it was written that it depresses the brake pedal with the key ON state and holds the brake pedal for 3 seconds in the case of this car.

The 12V battery was installed in the rear trunk and it was a sealed refreshable maintenance free battery. Since the cover of the battery is fastened with a special pin, it is impossible to remove it unless there is a knack (knowledge) for extracting the pointed pointed screwdriver and removing the pin.

Since it was not possible to measure it by slipping on the speed tester when it was lowered from the lift and passed through the inspection line, it seems that traction control is working, so it is difficult for the manufacturer / dealer to tell the cancellation method and measure it did it.

At the moment such a hybrid car is now mainstream, but in the coming era almost all cars will shift to such a clean and economy hybrid system.