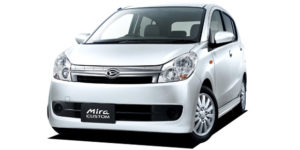 The function of the automobile sensor is to send some signal to the actuator which detects the input and performs the operation. Therefore, the trouble of the sensor has only two ways, whether the input is detected correctly or the signal is not sent correctly.

We introduce the actual measurement result of what kind of signal the sensor used in the car of Daihatsu Mira (engine model: KF-VE) is operating the actuator and the waveform observed by the oscilloscope .

Clamp the timing light to the connector for connection. Similarly, the engine tachometer clamps to the wire harness of the first ignition coil. Then short-circuit the EFI-T to E terminals of the DLC connector shown in Fig. The ignition timing reference value at that time is 10 ± 2 ° BTDC / 850 to 100 rpm. (N or D position, not adjustable.)

It is possible to read with the conventional engine check lamp. When the IG switch is ON, short-circuiting the EFI-T to E terminals of the DLC causes the engine check lamp in the combination meter to flash and repeatedly displays the abnormal code in ascending order of the number.

To erase the diagnosis code, it is OK to lock the IG switch, remove the EFI fuse (15 A) and connect the fuse for 60 seconds elapse.

Below, we introduce the waveform of the real sensor’s oscilloscope. The numbers in parentheses are terminal numbers of the engine control unit (ECU).

Similarly to the speed change control solenoid valve 1 with a vehicle speed of 5 km / h, it shows the output waveform of 2 (lower).