Grease Monkey
Suspension and roll
https://katuhito.info/en/suspention_role
Suspension and tire ground contactSuspensions are required to have a comfortable ride and excellent maneuvering stability, but among the elements necessary for vehicle design such as suspension geometry required for suspension design to realize these, design development It is perfect if the degree of freedom is high, the cost is low, and the space required for suspension installation in the vehicle is compact.For example, the independent suspension has a high degree of freedom in design, and ... 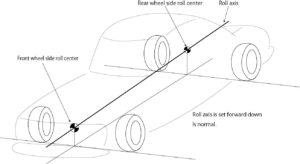 Figure 1: Roll axis at the center of the roll 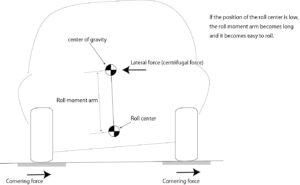 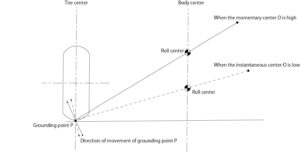 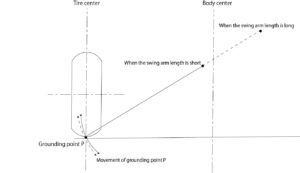 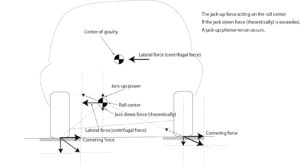 The higher the roll center, the greater the force that tries to lift the vehicle body when it receives a lateral force such as centrifugal force. That is, the jack-up phenomenon will occur. (See Figure 4) 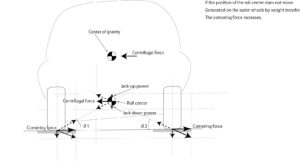 Figure 5: When the roll center does not move laterally 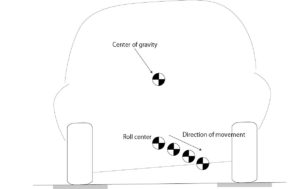 Therefore, if the suspension geometry is such that when the car body rolls, the roll center moves toward the contact patch of the tire inside the corner, the force to pull down the car body increases, and the car body moves at the corner. It is possible to perform cornering with a sense of stability that makes you feel like you are sinking. (See Figure 7) 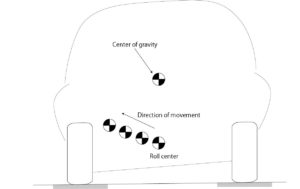 On the contrary, if the suspension geometry is such that the roll center becomes higher toward the outside of the corner when rolled, the vehicle body is lifted, the jack-up phenomenon becomes large, and the behavior becomes unstable. (See Figure 8) 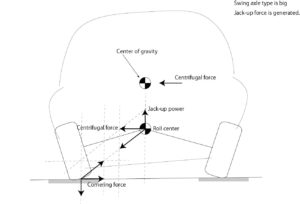 However, since the vehicle body does not roll much even when cornering, if the speed is increased in that state, when the lateral G reaches a certain value, the grip force may be suddenly lost without much roll motion. This is because when the car body is lifted, the positive camber of the wheels (tires) becomes larger and the jack-up phenomenon becomes larger. The behavior changes in the limit range, such as leading to spin. (See Figure 9)
In response to these problems, some models were developed by changing the suspension type to a semi-trailing arm type.

Is it desirable to have a low roll center?

Regarding the roll shaft connecting the front wheel side and the rear wheel side of the roll center, in many cases, the roll center on the front wheel side is generally given a slightly lower front characteristic. This is because when the tire rolls, the contact point of the outer tire during cornering tries to move further outward, but at this time, the direction in which the tire is facing and the direction in which the tire actually travels deviate (slip). This is because a kind of cornering force is generated (in a state where an angle is attached). (See Figure 10) 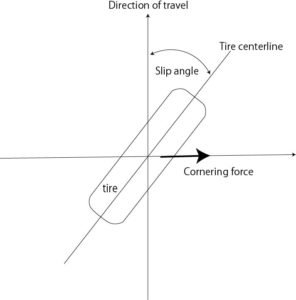 If the position of the roll center on the rear wheel side is high, even if the course of the car is disturbed by some factor, for example, a crosswind, the cornering force generated on the rear wheel when rolling will be larger than on the front wheel side, so the center of gravity of the car body should be adjusted. At the center, a moment that tries to return the car to the straight-ahead state is generated, and there is a tendency that the car is pushed back to the straight-ahead state and stabilized. (See Figure 11) 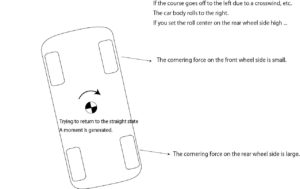 Figure 11: When the roll center on the rear wheel side is high

In addition to setting the front wheel lower, the roll shaft is considered to be desirable to be parallel to the inertial spindle of the vehicle body. (See Figure 12) 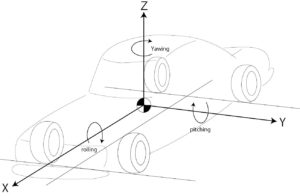 The inertial spindle is an axis that passes through the center of gravity of the vehicle body and minimizes the moment of inertia. There are three types of axes, yawing, pitching, and rolling (rolling), which are movements centered on the center of gravity, which are the basis of the behavior of the car, and each of them is orthogonal to the center of gravity of the car body.
The roll axis in question here refers to the X axis in FIG. 12 (1), that is, the one in the front-rear direction of the vehicle body. The moment of inertia here represents the difficulty of turning around the rotating body and the difficulty of stopping. In this case, the inertial spindle is slightly lower than horizontal when the heavy engine is below the front part of the vehicle body.
Here, if the roll shaft deviates from the parallel state with the inertial spindle, the vehicle body moves in the yaw direction when it rolls, so that the behavior of the vehicle body changes.
In the FF method, it is difficult to roll the rear wheel side and it is easy to roll the front wheel side to prevent the load from being excessively transferred to the front wheel outside the corner.
By such a device, it is possible to suppress the decrease in the cornering force which is the total of the left and right sides of the front wheel side, and at the same time, improve the ground contact property of the front wheel inside the corner to improve the maneuverability and acceleration. This is because the cornering force is roughly proportional to the load, but the rate of increase tends to gradually slow down as the load increases.
In addition, the roll center on the front wheel side is lowered in order to suppress the movement of the load. This is because when the lateral G acts, the lateral G acts on the center of gravity in the portion above the roll axis, and the lateral G acts on the roll axis in the portion below the roll axis. In this case, the moment acting on the roll axis is proportional to the height of the roll center. Therefore, when the roll center is lowered, the roll moment on the front wheel side is relatively lowered, and the load transfer is also lowered.
Generally, the tread change caused by rolling occurs when the suspension is stroking, so it does not occur once the roll has settled at a certain angle.
From the above, it can be said that how to set the position of the roll center is more related to the delicate feeling of the car body at the cornering entrance than to the improvement of cornering performance.