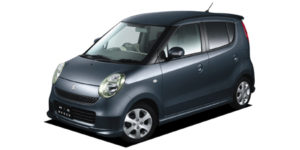 Many sensors used in automobiles are responsible for sensing some input of engine elements and signaling the actuators that control them. Therefore, there are only two troubles of each sensor, either not detecting the input correctly or sending the signal correctly.

The figure below shows the types and positional relationships of sensors that are adopted in the K6A engine of the Suzuki MR Wagon and the terminal arrangement of the engine control unit (ECU).

We introduce the actual measurement results of what kind of signals are output by the sensors used in the actual car and the waveforms observed by the oscilloscope.

Clamp the timing light to the ignition coil connection harness for No. 1 cylinder. (Lower figure) The reference value is 5 ± 3 ° BTDC / 900 ± 50 rpm, but can not be adjusted. After repairing the defective part, check again to see if it is at the reference value.

There is no place to install the tachometer, so check the engine speed with the maker dedicated tester. The reference value is 900 ± 50 rpm (N or P) at engine no load. (Unadjustable) Similarly check the defective part again for the reference value after repair.

By short-circuiting the DN terminal of the Diag Monitor Coupler (Milky White 6P) shown below with the IG switch ON, it can be read by the number of flashes of the onboard engine check lamp. The code is displayed in 4 digits, 0 is lighted for 1 second, otherwise it is lighted for 0.3 seconds, code is displayed for 3 seconds pause. For code erase, remove the DOME fuse for over 20 seconds. (Or, remove the minus terminal of the battery.) Actually, it was not possible to delete until about 60 seconds or more had elapsed.

Below, we introduce the waveform of the real sensor’s oscilloscope. The numbers in parentheses are the numbers of the terminal arrangement diagram of the engine control unit (ECU).

Both of these sensors are of the magnetic type.

Figure 3 shows the output waveform of the throttle sensor when IG OFF → IG ON → full accelerator → fully closed → IG OFF.

Fig. 4 shows the output waveform of the LAF sensor IPA signal at 2500 rpm.

The distribution method is a direct method (ignition coil with built-in power transistor).

The lower figure 11 shows the output waveforms of the SMA signal (upper) and the SMB signal (lower) during no load idling.

Variable valve timing of the intake side valve is varied by the oil control (OCV).

FIG. 12 shown below is the output waveform of the OCV signal immediately after the leave.